FIVE things Arsenal must do to beat West Ham today

The Arsenal side will look set to re-focus on the EPL today with a visit to West Ham United in their new stadium in one of the most eye catching game at the weekend. Following the EFL Cup defeat to Southampton the Gunners will look to return to winning ways when they take on the robust West Ham side who are kind of struggling at home this term.

The hosts are certainly not an easy opponent especially when the big sides come visiting and so the Arsenal side are in for one of their toughest games of the season. Boosted by the return of some players like Laurent Koscielny, Alexis and Mesut Ozil the Gunners will look to bounce back with a win, but against West Ham certain things and conditions are needed for the visitors to come out unscratched in the League clash. Here are five ways Arsenal can beat West Ham United in the Premier League this weekend away from home.

AVOID SET-PIECES
The West Ham side are one of the teams who exploit the back four mostly from set piece positions. It was evident at Old Trafford when the Red Devils were held to a 1-1 draw by West Ham following Diafra Sakho’s early strike after he was set up with Dimitri Payet inviting the ball into the box from a set pieces. It was that dangerous as Ibrahimovic (in the box) could not deal with the situation as Sakho wheeled away in celebration. Arsenal on their own hand have shown some defensive inconsistency this season just as was seen against PSG (Paris Saint German) in the 2-2 draw at the Emirates. The Gunners must organize themselves to avoid any imminent danger from set-pieces to stand a chance of picking up maximum points on the road. 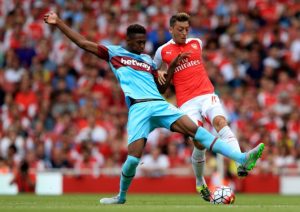 West Ham are surely going to bring their A game against Arsenal today and the Gunners must be up to the challenge to match the situation. West Ham have got physical players who may try to outdo Arsenal players who may be relying on their flair game. The hosts may employ long balls into the box and up balls in midfield to frustrate the visitor’s chances from building patiently in transition. Whichever way the Arsenal side should stand up to the physical challenge in order to win vital balls in the game. West Ham are notably good on aerial balls and the Gunners must force the West Ham side into change of plan when they nullify their style of play. The visitors must embark on 50-50 challenges if with clear intentions of winning it especially the aerial balls which can be crucial mostly in midfield in the entire course of the game. 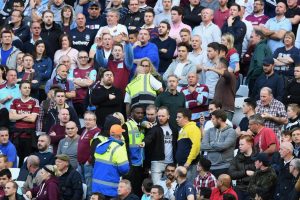 DEAL WITH STADIUM TANTRUMS
The two teams (West Ham United and Arsenal) are not the best of friends for sure as they set to lock horns in a rowdy London derby come tomorrow. As expected there will be rivalry on the field of play and this may tend to become emotional as the fans get into the game. For Arsenal who are fresh from a midweek defeat to Southampton there might be some cold feet within the dressing room but such fears must be shrugged off to come out in flying colours. Definitely the home fans (for West Ham) will throw some tantrums against an Arsenal player especially when their team is not at their best or possibly boo an Arsenal player as an indication of rivalry that exists between the two sides. Arsenal must rise above any negative euphoria and deal with the crowd effect in order to play their game and achieve the desired result from the clash.

DIRECT APPROACH IN TRANSITION
The Hammers are usually one of the difficult EPL sides to breakdown at home forcing a 1-1 draw against United despite the avalanche of time The Red Devils had to turn the game against them(West Ham)after they took an early lead in the game. Even Chelsea struggled to beat them 2-1 following some compact and good defensive work from the London side. Going into the game and bearing in mind the strength of the hosts defensively Arsenal must employ an incisive attacking partnership that would break down the opposing defence. With the return of the midweek absentees it would be nice to have Alexis Sanchez, Theo Walcott and Oxlade-Chamberlain start the game in order to run down the opposing team with pace and trickery. Quick transition play should be utilized and not just relying on slow (patient) build-up which may allow West Ham enough time to regroup in defending.

PUT ON THE AURA OF CHAMPIONS
Arsenal as much as they lost 0-2 to the Saints in the EFL Cup in the midweek but this game provides the Gunners the chance to turn things around with a win. It will be welcomed if they step up their game and give the Arsenal faithful reason to believe that their promising start to the season is not a fluke with a decent game away at West Ham. A win will enable Arsenal to prove that the Southampton’s defeat is just a one bad game and not a true reflection of the sides fate in the season. Arsenal must bounce back as Champions with red hot form to overcome the Hammers as wounded Lions show no mercy in the slightest of chances in the heat of the battle.