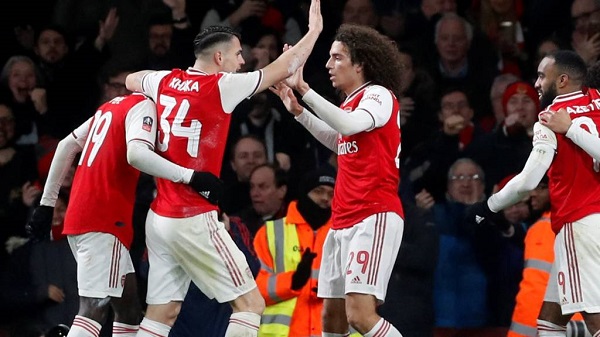 Arsenal beat Leeds United in the FA Cup but it was far from convincing and lessons need to be learned.

Arsenal secured passage to the next round of the FA Cup after beating Leeds United 1-0 at the Emirates. Here are five things that I picked up from the game.

Under Unai Emery when Arsenal made a slow start to a game it is usually almost impossible for them to get back into the game.

However, under Mikel Arteta, it seems this team doesn’t know when it is beaten. Arsenal started the game poorly and was fortunate not to be behind at the break.

However, they came out fighting in the second half and they took the game from their visitors.

Mesut Ozil has been one of the most improved players under Mikel Arteta but the German is still limited in what he can do for our new manager.

The German, just like his other teammates came alive in the second half of this game.

He did commendably well off the ball but he got tired quickly and when he was changed in the second half, he looked so exhausted even more than others who pressed more than he did.

Nicolas Pepe has to fix his consistency problems

Nicolas Pepe was the star of Arsenal’s win over Manchester United. He scored the first goal and set up the second in that game, but he struggled to do anything meaningful in this game.

The Ivorian started the game slowly and he never got to speed with the game in the second half. If he wants to help Arsenal, he would have to become more consistent.

Alexandre Lacazette needs a goal more than anyone else right now

Alexandre Lacazette can’t seem to buy a goal at the moment. The French man was started upfront alone by Mikel Arteta in this game, he did put in a solid shift in terms of pressing, but he couldn’t get a goal.

Goals are what fuels the confidence of strikers and I believe no one in that Arsenal team needs to score a goal now than Lacazette does.

Arsenal is not ready for three at the back

Mikel Arteta started this game with three at the back. He would have been delighted that they got the win in this game but in all honesty, it is a formation that may not work for Arsenal.

Leeds United constantly found gaps behind the Arsenal backline at the start and we were fortunate to have ended that half goalless.

That goalless scoreline wasn’t because we defended well, it was because of a lack of cutting edge in front of goal by Leeds.

If we use that set up against a team like Liverpool, we would suffer a heavy loss as they would use their fast wide men to devastating effect.