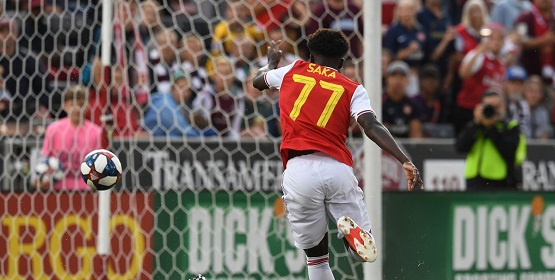 For all us night owls that stayed up to the early morning to watch Arsenal play the Colorado Rapids it was definitely worth it.

Forget the 3-0 win, that was always going to happen, it was more the actual performances and overall look of the team that was more important.

The kids are very comfortable

There was a bunch of stand out performances, James Olayinka scored an absolute screamer, Eddie Nketiah ran their defence ragged and Bukayo Saka just bossed it. The other youngsters did just fine as well. Was a good run out for them all and they will take confidence from that performance.

Carl Jenkinson was a surprise

OK, it was against the Colorado Rapids in a friendly and not Liverpool at Anfield in the Premier League but even so, I liked what I saw, he got his runs perfectly timed almost every time, his crossing need work and while it is always easy to have a go at him when he plays poorly we should also be just as keen to say he done well and last night, he did well in the wing back position.

Gabriel Martinelli had a great debut

He scored a bit of a fluke goal but who cares, it was a goal on his Arsenal debut but what I really liked about him was two things, one his positioning, he knows where to be when the attacks unfold and secondly, the lad ran his heart out and more than once he popped up to help out in defence. This kid has something about him for sure.

Has to be said, the atmosphere changed when the German came on and they went bloody mental every time he touched the ball. We can say what we like about him and his performances but he is iconic and is clearly still the main man in terms of international audiences. Now, if his performances could reflect his image, nope, stop, not going there. They loved him, that is all I need to say.

The yellow numbers on the back of the shirts were awful, they should be white, they look out of place and make the kit look, well, horrible.

Sorry, but that is how I feel about those numbers, I did not like them, I said it in the comments last night and I am still of that opinion.

Yes, it was just a friendly against a very poor team and we will know a lot more when they play the big boys later on the tour but I can only judge the team on what I saw last night and I liked what I saw.