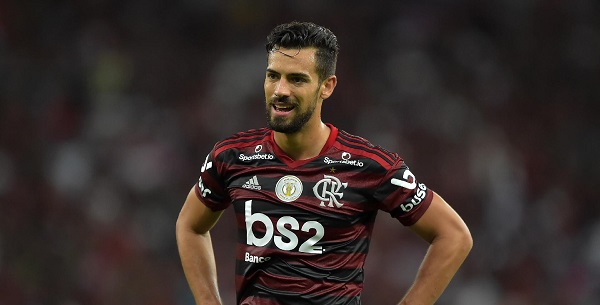 Arsenal was close to completing a move for Flamengo defender, Pablo Mari just a few days ago but the move looks dead in the water at the moment.

The defender had travelled from Brazil to London with the hopes of signing a deal with Arsenal, however, he disappointedly returned back to Brazil after both clubs stance seemed to change.

Reports have suggested that Arsenal tried to change the terms of their agreement with the Brazilians and that infuriated Flamengo.

While the player is keen on the move and both teams have reportedly returned to the negotiating table, Mari’s manager at Flamengo, Jorge Jesus has insisted that he would prefer to keep the player.

The manager admitted that the player could be on the move but he made it clear that he wants to keep hold of his best players including Mari.

‘Gabi [Barbosa] is not from Flamengo, he is from Inter,’ Jesus said per the Metro. ‘Pablo [Mari] is a Flamengo player. ‘There are two players that we really want in our squad.’

Jesus added: ‘Pablo had a great season, as most of them,’ Jesus said. ‘He has clubs interested in him, it is a subject to the board. ‘We really want to keep both of them here, we are very confident.’

The latest injury to Shkodran Mustafi has made it even more important that Arsenal buys a defender this month.

This is now becoming a saga. It would not be too bad if we were talking about a player valued in the tens of millions but we are not

Still, there is enough time for the deal to be done. Let’s hope sensible heads prevail here.