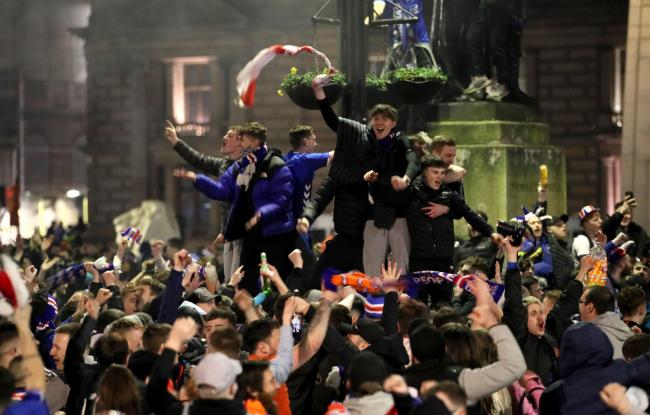 Just like when Liverpool were crowned Champions and Leeds’ promotion to the Premiership was confirmed, Rangers 55th title victory was met by thousands flocking to Glasgow, not just breaking lockdown protocol but setting off fireworks, damaging buildings and fighting with police.

The Scottish government, FA and eventually the club all said what you expect them to say, condemning the behaviour of supporters who ignored Covid guidelines just as the UK is getting close to finding light at the end of the tunnel.

Yet it’s all good for their PR boxes to tick, yet if large gatherings really concerned any of the above, more pre-emptive measures could have and should have been put in place.

I included two English clubs as examples as well to show this is a problem throughout the mindset of British Fans.

Football is a beautiful game, but it is just that …. a game.

Yes, Rangers waited a decade and Liverpool even longer to be called Champions.

Yet when you think that the Pandemic has caused people to work from home, children to be home schooled, loved ones kept apart, families separated, etc …. The price of football fans not allowed to shout and drink beer in the street is a small compromise to make.

I can only imagine the poor men and women that are not allowed to attend a funeral of their loved one. What must they be thinking of scenes in Scotland this weekend where it felt like crowds were intentionally trying to not be respectful?

What about the NHS workers who instead of claps from the public would prefer common sense?

Like taking the knee, this is something else football pays lip service too.

A 10-year-old could have worked out Ibrox was going to be surrounded by thousands of fans the second Celtic dropped points on Sunday. If those in power cared, police, club security, etc, could have had an action plan in place.

I have got confused over the last year whether our government rules are just suggestions or what can be legally implemented?

I just know it’s been a case of when, and not if, Rangers would be confirmed winners of the SPL (same with Liverpool and the PL).

So that’s a long time for the associations of both countries to make clear their expectations and spell out any consequences.

I bet you if there was a threat of the title being stripped of your club, in an instant you increase the percentage who stay indoors to celebrate.

At the very least Rangers (and Liverpool) instead of promising a future bus parade should cancel those plans as punishment for their fans for putting the welfare of others at risk.

Because that’s what zero tolerance is. It’s saying you simply won’t accept below certain standards.

By now the whole of the UK know the sacrifices their peers have made and chose to do what they want anyway so hit them where it hurts, football.

If they take a sport so seriously, they are willing to, in front of police, blatantly break guidelines designed to keep everyone safe, then they are taking the sport too seriously and would therefore benefit from their team suffering.

If Arsenal lift the Europa League (a big if) and morons set off fireworks outside the Emirates, I will say the same.

I’m a passionate Gooner but for some reason, no matter the result, I never felt the need to swear, jump on a car or smash a window.

It’s like in World Cups when you see English fans in pubs respond by throwing beer in the air. I find it contrived. I have been in that situation. Happy as anyone else, but with enough savvy that I didn’t pay London prices for a Magniers just to waste it!

There will be some readers who can’t get out of a football bubble. They will say it’s harsh to punish a club so severely. I say; say that to someone who’s buried a loved one and been told they can’t attend their funeral?

If one person becomes ill because of those scenes at Ibrox, that’s one too many. If there’s another spike and another lockdown and you gathered outside a stadium or indeed a march or to go to the beach … Then none of you can complain.

Shame on clubs and TV companies for celebrating this behaviour as well. If Sky cared, why show these fans on TV? Why laugh at fireworks being set off while Liverpool are playing?

Let’s make a rule now across the board.

Until the government says so, any fans gathering to celebrate will be in danger of the title being taken from them. As weekend scenes saw over 20 arrests, injuries and damages to property …. I would say that would count as unacceptable. I bet that would instantly reduce the next group of fans who think about heading to a stadium with beer cans and flares?