Okay so the World Cup is all over bar the shouting, but England’s chance to win the Bronze Medal on Saturday will be played at the same time that Arsenal play their their first ever game under Unai Emery at Boreham Wood. I know which game I will be watching…

But it is not just the Arsenal fans that will be excited, it is also set to be a big moment for the Boreham Wood manager Luke Garrard, who spent four years at Arsenal as a youth player. “I’m going to be immensely proud,” Garrard told football.london. “There is a great working relationship between the two clubs and that is something that the chairman has done over many years. That’s been because of hard work for 20 odd years.

“The luxury I have of being the manager now is I get to be the first manager to shake Unai Emery’s hand in an Arsenal fixture.

“I’m an Arsenal boy through and through, I love Arsenal. I hurt when everyone hurts and I’m joyous when everyone else is joyous. I follow the club, I support the club. It’s something that is dear to my heart.

“So to walk my team out and shake the hand of Unai Emery will be a proud moment. My wife and kids will be in the stand, my dad and my brother who both follow Arsenal immensely will be the stand, it just makes it all even more special.

“I’m a north London boy so you’re either a red or you support the other mob from the other side of town.

“The players are excited, some of them also support Arsenal.”

And what a first game it could. Due to most of our players missing out on the World Cup we have had many of our stars training with Emery since the first day, and the Boreham Wood fans are likely to be treated to seeing players like Sokratis, Petr Cech, Hector Bellerin, Shkodran Mustafi, Rob Holding, Calum Chambers, Sead Kolasinac, Aaron Ramsey, Henrikh Mkhitaryan, Pierre-Emerick Aubameyang, Ainsley Maitland-Niles, Lucas Perez and Alexandre Lacazette, as well as some promising youngsters coming through and I think I can see Guendouzi in the pic too! 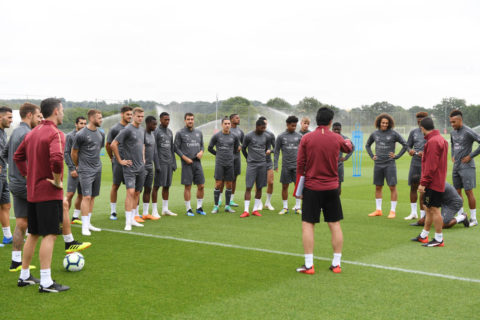 Which game will you be watching?