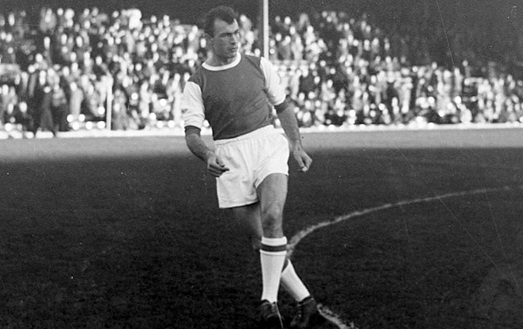 Although Eddie’s time at The Arsenal was short, he made quite an impression on me!!!

Signed by George Swindin in November 1961 for £34,000 HE made his debut against Nottingham Forest on the 18th of that month.

It was Swindin’s last signing before Billy Wright took over and the two had played together in a strong League-winning Wolverhampton side, with Eddie playing more than 200 games for the Wanderers.

Despite having played together for so long, for some reason, Billy did not seem to like the no nonsense and tough tackling style of Eddie at The Arsenal and, just ten months into his Arsenal “career” he was sold to Stoke City for £35,000 – in those days, we did make a profit with transfers it seems!!!

In total he only played 22 games and scored 1 goal, but it was his style of play that took my breath away. I remember one game at Highbury, when I was standing at ground level in the west stand.

The ball went out for a throw in for us and Eddie came running over for the ball. I handed it to him and said “Come on Eddie, your one of us now” as most 16-year-old would…brash and demanding!!!

He looked at me, smiled and growled out loudly “Aye sonny boy” and took the throw in – I was so embarrassed, but also proud that he had acknowledged and spoken to me!! How pathetic it seems today!!!

His “playing style” consisted of intimidating, fouling, being a real hard man and completely running the rule over his opponents…let alone a spotty 16-year-old.

During his Stoke City playing days, he was described as being “mad” by his trainer, Frank Mountford and it is recorded as fact, that on more than one occasion, he would wait until the referee was out of sight, then would headbutt his opponent!!!

Another story involves Stanley Matthews and Ron “Chopper” Harris – it was after Chopper had poleaxed Sir Stanley and Eddie threatened Chopper in front of the ref.

The referee admonished Eddie who replied thus: “That’s the trouble with you referees. You don’t care which side wins!” Sir Stanley said in his autobiography that this was one of the greatest lines ever said on a football pitch.

When he retired in 1969, he ran a building and decorating business. His mother, Sarah, was the Wanderers laundry lady for over 30 years from the 1950’s and outlived Eddie by 11 years.

Despite his hard and madman image he was a very successful player, his stamina, strength and efficiency earning him a full England call up.

It is worth noting that the Wolves side he played in, missed out on a hat trick of league wins by just one point in 1960 to Blackburn Rovers, who Wolves then thrashed them in the FA Cup final.

In summary, not many fans will remember him, and I have done this article in the hope it might stir some memories amongst the old fogie group within the “justarsenal” brigade!!!

Thanks to Wikipedia and the Independent news.