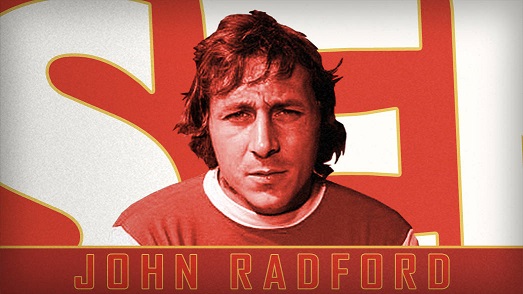 JOHN RADFORD – AN OLD-FASHIONED CENTRE FORWARD WITH THE WINNING TEMPRAMENT:

John joined The Arsenal as an apprentice in 1962 and his goalscoring abilities in the youth and reserve teams, saw him awarded with a professional contract in February 1964.

His very first senior appearance was against WHU on the 21st March 1964 and this turned out to be his only run out in that season.

The next season saw him being used slightly more, with 15 first team appearances, which included an Arsenal record at that time.

It was against Wolves on the 2nd January 1965, that he scored a hat trick thus becoming the youngest ever Arsenal player to do so at the ripe old age of 17 years and 315 days…and this record still stands today.

Another point worth making is that “Raddy” is our fourth highest goalscorer, with a tally of 149 goals and his 100th goal was scored against Leicester City on the 25th September 1971 – his 306th game for the Gunners.

Some of the illustrious fellow forwards to have played alongside him are:
Joe Baker – Brian Kidd – Ray Kennedy – George Graham and it was only when Frank Stapleton and Malcom McDonald formed their own lethal partnership, that John was seen to be a saleable player and he joined West Ham in December 1976.

But The Arsenal was always his club and his complete record as representing the club is as follows:

One of the more memorable of those 149? Well, the wonderful header that gave us the overall lead against Anderlecht and the eventual Inter-Cities Fairs Cup trophy.

He was also a great team player and made many “assists” for others – cast your minds back to the double winning 1970-71 Fa Cup final. It was John who supplied both passes for Eddie Kelly and Charlie George to score the goals that beat Liverpool that day.

He also scored 21 goals in the league during that double winning season – so he certainly was a player who impacted the great years of 1969, 70 and 71.

It was after Bertie Mee decided to break up that great double winning side to early, that we fell back in the pecking order and Raddy suffered as well, as his goals started to dry up. This, along with the injuries during the 1975/76 campaign saw The Arsenal sign McDonald and promote Stapleton and this led to the parting of the ways.

Living in Saffron Walden at the time when John played and managed Bishops Stortford, I was able to see him still involved in the game he gave so much too.

He actually took Stortford to their own unique double in 1981, promotion and the FA Trophy before retiring to run The Greyhound pub in Thaxted.

His two England caps were really not a fair measurement of his skills, but The Arsenal benefited from the short sightedness of Sir Alf Ramsey regarding Raddy, as he committed himself fully to our club.

John married his Dutch born wife, Engel, in 1968 and they have two sons.

Raddy was never a “showman” centre forward, but was a dedicated, hardworking team player, who is represented at The Emirates with his name amongst the murals and an individual section along the outside walls, giving his personal stats and history.

A real Arsenal man, who helped to win us our first silverware in 17 years, John’s favourite memory of his career at our club.

Thank you for some great memories as well John, you were a superb player and part of our clubs great history – I was at the Anderlecht game, in the North Bank crowd and that night will remain with me till the day I die – Wonderful wonderful memories.

Thanks to Wikipedia – arsenal.com and transfermarket for information used.