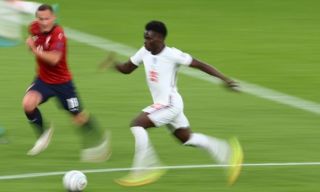 Former Arsenal forward Michael Thomas has hailed England manager Gareth Southgate for his tactics in the win over Germany, whilst reserving special praise for both Manchester City’s Raheem Sterling and Bukayo Saka also.

The Three Lions broke a curse by defeating the Germans at a major competition for the first time in over 50 years, winning the fixture 2-0 inside the 90 minutes, but the way in which they won was the impressive part.

Germany were limited to very little chances, with Southgate’s setup causing plenty of trouble for their rivals at both ends of the field.

Thomas has moved to hail the victory as ‘massive’, adding that the manager got it ‘tactically spot on’ as well.

“England’s win against Germany was massive for the players and the supporters’ belief that we can beat the big nations,” Thomas told CaughtOffside exclusively. “Southgate got it tactically spot on and the players executed his plan. That game should spur the players on to the next game against Ukraine.

“All the players have been putting in massive shifts and look like there is a real togetherness within the squad. The likes of Saka and Grealish have been brilliant in adding a real driving force for the team to go forward, while the defence have been also been superb, including the goalkeeper Jordan Pickford.

“The one player however that I feel deserves major credit is Raheem Sterling. He hasn’t had an amazing season with Manchester City, but has put on the white shirt and performed remarkably well, even through some of the hate coming towards him in the past.

“He looks as though he is relishing being a leader within the squad and is having real fun on the pitch.”

Sterling is the obvious standout given he is our current top goalscorer, but MT did reserve some special praise for our young star also.

“Saka has been immense! He has had a wonderful season with Arsenal and only looks to be getting better,” Thomas added.

“All the noise coming from the players in the camp shows what a talent he is. He has done his talking on the pitch so far, and hopefully there’s more to come before the end of the tournament.”

Saka has definitely showed onlookers why he was deserving of his place in the team, let alone the squad, although early reports do claim he is set to miss out on today’s clash as he is nursing an injury.