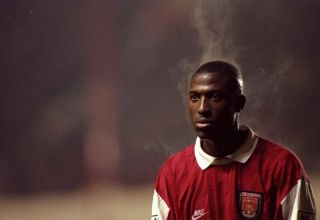 Kevin Campbell has revealed that Nicolas Pepe is the man who does the most work after training of the current Arsenal squad.

The Ivory Coast international joined the club from Lilly in a club record move in the summer of 2019, but hasn’t managed to find the level that is expected of him as of yet.

The 25 year-old has been in-and-out of the first-team since joining the club, with him yet to impress in long spells.

Pepe has returned to form recently however, and is staking a claim for more regular minutes, and Campbell is one who would not be surprised by his resurgence given the inside knowledge he retained on the forward.

“Something that I learned is there is one player at the club who does the most work after training, and that’s Nicolas Pepe,” Campbell told Highbury Squad’s Youtube channel.

“One-on-one with the manager, explaining what he wants, working at positioning, receiving. Now we are starting to see Pepe look more like a consistent player. Hard work pays off.”

If Pepe is the kind of player who will work hard to get the level that he wants/needs to be at, then he certainly sounds like he has the right mentality to overcome his struggles of recent months, and his form lately only moves to back that up.

Will Pepe become one of our most important players if he continues to work hard as he appears to be?