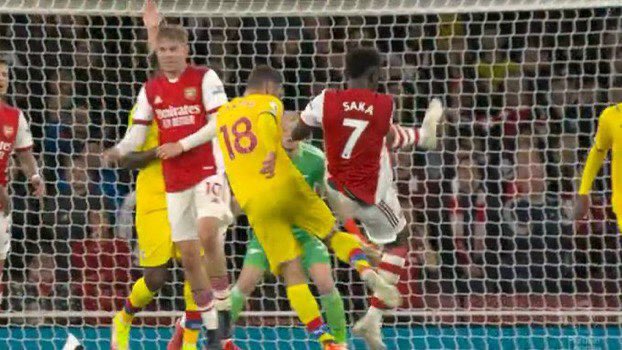 Mark Halsey has claimed that Crystal Palace should consider themselves lucky to have completed the 90 minutes against Arsenal with 11 men.

The two sides played out a 2-2 draw last night in what was a physical battle of wills, one which the visitors were lucky to survive through without punishment from the referee.

Bukayo Saka picked up a yellow card shortly before the end of the first-half for a trip on James Macarthur, and their midfielder took his revenge moments later when kicking out at the England international on the edge of the box, but the official only reprimanded him with a yellow.

former Premier League ref Halsey insists that Palace’s player was ‘extremely lucky’ not to have been sent off.

“James McArthur was extremely lucky not to receive a red card for a wild kick on Arsenal’s Bukayo Saka,” Halsey said.

“The Crystal Palace midfielder was late on the challenge, had no chance of winning the ball and booted Saka in his right calf at the end of the first half.

“Mike Dean showed McArthur a yellow card but I felt it was an act of violent conduct and further punishment could have been dished out to the Scotsman. As a result, Saka was forced off at half-time and later had an ice pack on his leg.

“McArthur was also fortunate not to be cautioned earlier in the half for denying Emile Smith Rowe a promising attack at the Emirates.

“Mikel Arteta’s Arsenal and Saka could have felt aggrieved as Dean showed inconsistency by later producing a yellow card to the wide-man for the same offence on Jordan Ayew.”
‘
Had Macarthur have been sent off, I can’t see how Palace would have been able to come back from the 1-0 deficit in the second-half, and the game would no doubt have played out very differently, but while we can feel a little aggrieved the decision didn’t go as expected, our performance is what we should be focused on.