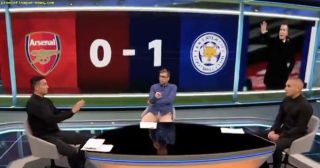 Former Premier League stars Leon Osman and Tim Cahill have both claimed that Arsenal’s opening goal against Leicester shouldn’t have been ruled out.

The Gunners went onto lose the fixture, after Jamie Vardy came off the bench to get yet another goal against our side, but the game would no doubt have played out differently had our side not had their early goal disallowed.

Alexandre Lacazette got the ball in the back of the net inside the opening five minutes, as he lept high in the box to head home from our corner, but with Granit Xhaka leaping out of the path of the ball, the goal was ruled out.

Our manager has since insisted that the goal should have stood, and both pundits on last night’s BBC show agree with Mikel Arteta.

“I completely agree with Arteta,” Osman told the BBC’s Match of the Day program (via Football.London). “People are around the goalkeeper.

” You look at the position he is in and once Lacazette gets that touch, he is not hindering his (Schmeichel’s) vision, he is not stopping him from diving, he is nowhere in between.

“He just can’t save it. If the VAE would have looked like that and realised he wasn’t close…”

Cahill added: “VAR is accountable. You look at the Pickford incident and it’s subjective decisions.

“They said it was a one, two, three step process. The referee could have asked and got this right. It looks like it’s a goal.”

We will now have to stew on our feelings after another loss, which probably shouldn’t have happened, with questions now being asked of the manager, which feel a little harsh given the circumstances around the loss…

Is it harsh to slam the manager when we were robbed of an early goal which no doubt would have led to a different 90 minutes?