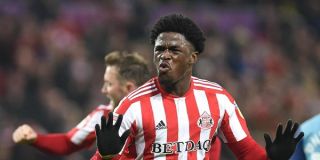 Bordeaux striker, Josh Maja, has revealed that he would be making a dream move if he joined Arsenal.

He was born in London but represents the Nigerian National team, he developed his game in England with the likes of Fulham and Sunderland before moving to France.

He also turned out for Manchester City but it was the Black Cats who gave him his first professional contract and he scored 17 goals in three seasons for them.

He has been developing his career in France since making the move across the channel, he has scored eight goals and provided three assists for the French side this season and he is highly regarded.

Goal.com, citing Bein Sports reports that the player dreams of playing in the Premier League and his preferred team would be Arsenal.

“Obviously, growing up in London, one of my dreams is to play in the Premier League,” Maja said in an interview with beIN Sports. “Hopefully in the future, that opportunity will come.

“My team is Arsenal, so hopefully one day I’ll get the opportunity to play for them. If not, then I’ll keep supporting them anyway.”

According to the same report he has been linked with a move to the Premier League previously, but it is Arsenal that he hopes will come calling.