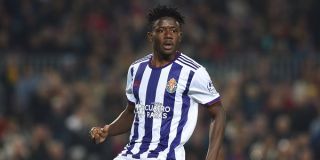 Rennes has become the latest team to be linked with a move for Arsenal target, Mohammed Salisu according to a report from Le10Sport.

The young Ghanaian has been in fine form for Real Valladolid this season and his performances have attracted the attention of a number of Premier League teams including Arsenal and Manchester United.

The Gunners are looking to sign another defender when the transfer window reopens, but because of the impact of the coronavirus pandemic, they don’t have the means to spend too much money.

And that is the reason why a move for Salisu makes a lot of sense. Le10Sport also claims that The Ghanaian is available for just £10 million, which won’t be too much for Arsenal or any other English side looking for a decent defender in the summer.

Mikel Arteta already has William Saliba for next season and the Spaniard will possibly want to build his defence around the young centre back.

However, he wants another defender to partner Saliba at the heart of Arsenal’s defence and Arteta may think that the young Salisu is perfect because he can groom him to become the player that he wants.