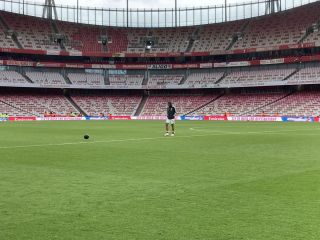 Gabriel loses tooth as he celebrates Luiz’s departure from Arsenal

As Arsenal loses an experienced player in David Luiz, Gabriel Magalhaes also lost a tooth on an interesting last day of the season.

The Gunners went into their last Premier League game against Brighton, hoping to get a win to play their part in earning a place in the European Conference League.

While a European place remained uncertain, we did know in advance that this would be the last time we see Luiz as an Arsenal player.

What we all didn’t know was that Gabriel will return home from the game without a tooth.

The Brazilian was selected to start the game against the Seagulls and partnered Rob Holding at the back as they kept a clean sheet.

Luiz missed the match with a thigh injury, but the Brazilian has already decided to leave Arsenal so it would have been his last game for the club.

He was celebrated by the club after the final whistle, with the players hugging him on the pitch.

Gabriel joined and lost a tooth in the celebration.

Sky Sports posted a video of Arsenal stars celebrating with Luiz. Shortly after that, the former Lille man could be seen looking for something on the pitch and it has been reported to be one of his teeth.

“Rock at the back” Kevin Campbell lavishes praise on impressive Arsenal man
8 November 2021, 22:15