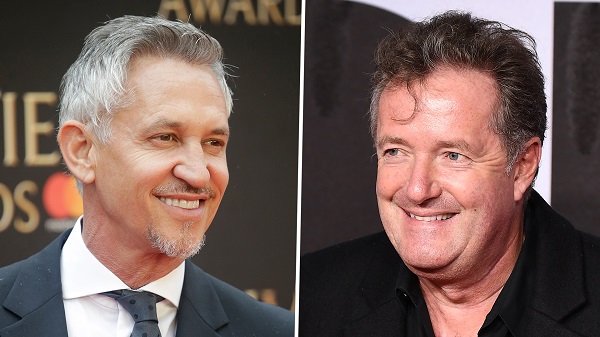 After not losing a domestic game in 2020 before the suspension of football, Arsenal has now lost their first two games back from the break.

The Gunners were beaten 3-0 by Manchester City in midweek and that loss was understandable because they were reduced to 10 men.

However, fans expected them to come back better in their next game against Brighton, but they did nothing like that after allowing Graham Potter’s side to come from a goal down to beat them 2-1.

The Gunners have now drifted further from their goal of ending this season in a Champions League place.

Gary Lineker and Piers Morgan were both watching the game and they took to social media to react.

It’s not ‘bad luck’ when a striker deliberately rams a ‘keeper like that after he’s caught the ball. It’s an act of reckless aggression that ended Leno’s season. https://t.co/fh4aAUMK75

Asking footballers to play football 3 times a week is what they would want. They’ll be desperate to play. Injuries happen, it’s part of the game. Given what our frontline NHS staff have been through it’s hardly a big ask. https://t.co/JHqOcXISRM

There there was their differing reactions to the winning goal

Great winning goal for @OfficialBHAFC but still think @Arsenal can finish in the top half.

Lineker and Morgan are always guaranteed to provide us with entertainment with their tweeting, however, it is usually to laugh at them as opposed to agreeing with them

Piers Morgan begs Kane to return to Arsenal and says his time at Tottenham has ran its course
27 April 2021, 13:30