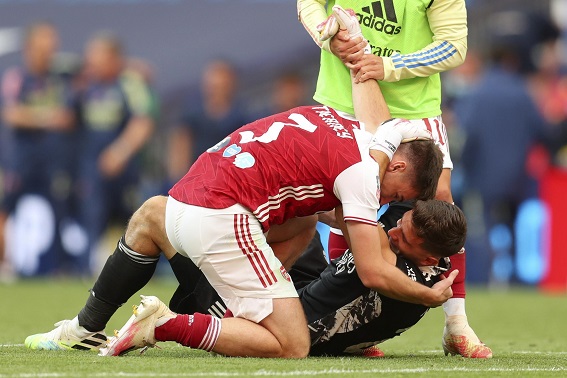 Good luck to Emi Martinez – He has earned his Arsenal legacy

Thank You Martinez by Dan Smith

So, we all waited impatiently for the team news from Craven Cottage and it kind of made us sad. No disrespect to Matt Macey, but we really didn’t want to see his name in the squad as it pretty much confirms Emiliano Martinez is leaving the club after a decade.

Left out to either finalise negotiations or because his head was deemed distracted, It’s an underwhelming way for the Argentine to depart given his contribution to us winning the FA Cup.

It appears his last game as a Gunner was lifting the Community Shield. For someone who spent the last 10 years mostly loaned out, his Arsenal career has ended better than he could have imagined.

Arteta was clearly content to have two keepers battling to be number 1, as competition would have brought out the best in Martinez and Leno.

It was the player who has made this choice, turning down a new contract even though his wages would have improved dramatically.

The decision isn’t a financial one. The incentive at 28, is to be playing every week and he just couldn’t get that guarantee from our manager.

You can see it from all sides. Maybe you can argue he should have the confidence to back himself, the self-belief that he would carry on earning the role.

Yet I can see it from his point of view. From March onwards, he performed beyond expectations. In life you can only ever give your best version of yourself and that’s what he did. If that’s still not enough to be assured minutes in the Premiership, it might never happen.

Football is a fickle business. If he had gone back to being our cup keeper and made a couple of mistakes, would the next summer have the likes of Aston Villa reportedly willing to offer you a big deal? This could be his one chance to be a first-choice keeper in the ‘best League in the world’ increasing his chances of being his country’s first choice.

There’s every chance of course this was just a purple patch. You know the saying, form is temporary, class is permanent. After all, the likes of Arsene Wenger and Unai Emery never saw him good enough to even be back up. If you had said this time last year, we could get 15-20 million for Martinez you would have taken it.

He could flop at Villa Park and it will look like great business for Arsenal, or continue to excel, and he would be the one who got away (I hope we have a buyback clause).

I rarely agree with our transfer strategy, but you always felt at a time when you don’t know when you’re getting match-day revenue it was logical to cash in on one of the Keepers.

Whatever the intentions, can you morally ask players to take salary cuts, make staff redundant, then turn down 15-20 million on an asset you don’t plan to feature most weeks?

I say ‘whatever the intentions’ as I continue to question the motivation behind sacking 55 people just to save a couple of million pounds.

Many have mocked me for it and called me negative, but I maintain let’s wait till the end of the deadline to see what net spend we have compared to say a Chelsea.

The squad were told taking a pay cut would save the jobs of non-playing staff. That was a lie.
Now though we are told that was needed so the funds would be there to strengthen the Arsenal squad (the only squad asked to do this by the way).

As I write this, we ripped up Mkhitarayan’s contract to give his wages to Willian, Ceballos’ salary was already budgeted for, as we are paying him what we were giving Ramsey.

We bought Gabriel for approx. 23 million (rising to 27) but are about to get 15-20 million back in for Martinez. I thought we were sacking people for the sake of improving the squad – not for a net spend of what, 7 million? Chelsea meanwhile are spending over 200 million, but we are going to challenge for the title. Not with this owner. Which is a shame as we have the right manager.

For the last decade it didn’t seem Martinez would leave any kind of legacy in North London. Loaned out to 6 clubs, the man himself wouldn’t have believed he would be remembered in our history. Yet no one will forget his tears at Wembley in August. Gooners will fondly remember just how much the moment meant to him and will tell their grandchildren how he was in tears.

When he had left home, he promised his parents one day he would return to South America with a winners medal. It’s like a movie.

History tells us Arsenal have won 14 FA Cups. He can tell his children he massively contributed to one of them, no one can take that honour away from him.

So, if Emiliano Martinez is leaving …. and our team news at Fulham suggest that is the case, he leaves with a place in our hearts…