Granit Xhaka – A dream come true for him and the Arsenal fans! 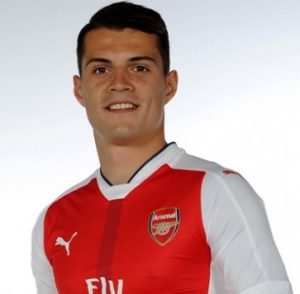 At last Arsenal.com have finally put us out of our misery and officially announced the arrival of Granit Xhaka at the Emirates. He says that coming to England is a “dream come true” and he is very, very happy to be here.

We can all feel the relief that the deal didn’t fall through but we sincerely hope that this is nowhere near the end of our summer business….

So here is Granit Xhaka’s first ever Arsenal Media interview in full…..

Granit, welcome to Arsenal. How does it feel to be an Arsenal player?

I am very happy to be here. It’s a dream come true and I’m happy.

You’ve said before that England is your dream and you have not hidden that fact. Why is it so important for you to play here?

I remember I was young and the first game I watched was in the Premier League. It’s a big dream for me and now that I’m here I am very, very happy.

I like so much. I like the style of football in the Premier League. It’s aggressive and I like the way Arsenal play football. It’s not like other countries but it’s very nice here.

You say it’s aggressive, and every game in the Premier League is a fight…

Yes, it’s a fight. I like that but Arsenal can also play football and that’s very good.

Is the Premier League similar to the Bundesliga in many ways?

I don’t think it’s the same. In Germany you can play aggressively but the referee will always blow his whistle, but in England that’s not the case. That’s better for me.

How would you describe your playing style?

I like to play football. I’m an aggressive player and also a leader. I’m only 23 but I captained a good team in Germany.

If Ottmar Hitzfeld says that then it’s a big compliment. Ottmar is a big coach and a good gentleman. I don’t know if I’m a young Schweinsteiger, I’m another player. I am Granit Xhaka.

How much did being captain at Borussia Monchengladbach help you become a leader?

When I was younger, even though I had a big brother, my parents would give me the house key every day. It’s in my head that I am a leader and captaining Monchengladbach was very good for me.

Arsenal finished second last season. Do you feel as though they’re on the cusp of great things?

Of course. I’ve looked at Arsenal before, on every weekend, and I know they are a big club. This year they finished second and that was a very good season.

Could they finish first next year?

Well his English seems pretty good considering he has played in Germany for the whole of his career so far. Maybe he will settle in very very quickly……

And here is the official announcement from Arsenal.com.

Arsenal have reached an agreement with Granit Xhaka to join the club on a long-term contract for an undisclosed fee.

The 23-year-old Swiss midfielder arrives from Borussia Monchengladbach, who he captained to fourth place in the Bundesliga last season and Champions League qualification in the past two seasons.

Xhaka, who has made 41 international appearances for Switzerland, joined Borussia Monchengladbach in 2012 from his hometown club FC Basel where he spent 10 years, progressing through the youth ranks.

During his time with Basel, Xhaka won two Swiss League titles and the Swiss Cup in a Double-winning season in 2011/12.

“We have been watching him for a long time now and he is a player who will add quality to our squad. We wish Granit a good Euro 2016 with Switzerland and look forward to welcoming him to Arsenal ahead of next season.”