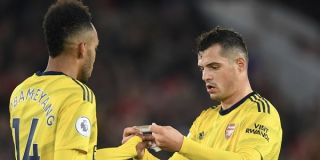 Granit Xhaka has admitted that losing Pierre-Emerick Aubameyang in the summer would be an enormous blow to the Gunners.

Aubameyang has been arguably the most consistent player at Arsenal since he joined the club back in January 2018.

His goals have helped the club to remain among the elite sides in England since he moved to the Emirates from Borussia Dortmund in 2018.

However, the club has allowed him to enter the final year of his current deal and they are now struggling to get him to sign a new deal.

The Gunners want to keep him but with so many top teams considering a move for the 30-year-old, he could decide against putting pen to paper on a new Arsenal contract.

Recognising that the Gabonese attacker could leave the Emirates, Xhaka has admitted that he would be an enormous loss should he decide to join another team in the next transfer window.

He claimed that Aubameyang isn’t just a good goal scorer, but he was a positive professional as well.

“If that were to happen, it would, of course, be a great loss for the team and the club,” he told SportBild via Standard Sports.

“Auba is always dangerous and always good for a goal, and as a guy, he’s also really great. He is always positive, optimistic, helpful and very professional.”