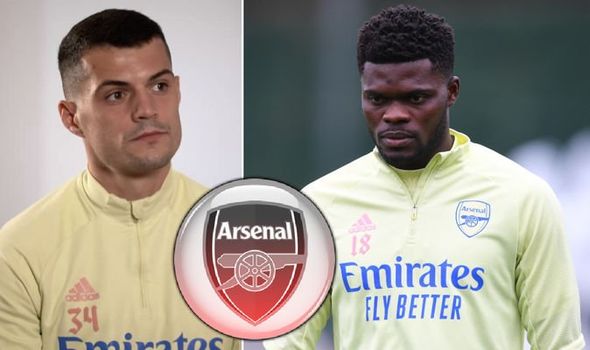 Granit Xhaka claims that Thomas Partey is not only improving his game, but also improving the Arsenal team overall.

The Ghanaian midfielder joined the club on Deadline Day back in October, but has only managed 11 Premier League appearances so far thanks to a number of injury issues.

Partey is in the squad for tomorrow’s crunch game with Benfica, where we will be targeting the win which is needed to see our side qualify for the next round, and should he prove fit enough to start, he will likely find himself line up alongside Xhaka.

The Swiss midfielder has revealed his thoughts on his midfield partner, stating his disappointment in Partey’s struggles this term, whilst praising the qualities he brings to the team.

“It is a shame we have not played a lot together, because he has had two big injuries. But the games we have played together, I think he looks very good, very solid,” Xhaka told Arsenal Media ahead of tomorrow’s Europa League clash.

“We are very good together, not only on the pitch but off it as well. He is a lovely guy, he is improving our team because you can see how much experience he has at this level, and this is good for my game as well.

“As well, the other midfielders in the team are improving step by step and the important thing is that we can see and we can feel we are improving and we have to keep going like this and let’s see what we can take from the end of the season.”