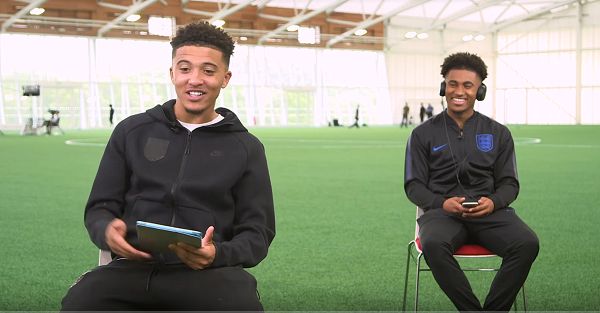 Jadon Sancho has tipped Arsenal’s Bukayo Saka and Manchester United’s Mason Greenwood to give England manager Gareth Southgate a selection nightmare next summer, with the pair thoroughly impressing in the previous campaign.

The Borussia Dortmund winger enjoyed a thoroughly impressive campaign also, earning a strong following from Manchester United who had been trying to strike a deal for his signature, but that appears to be off at present.

Sancho was looking forward to trying to help England to Euro 2020 glory this summer, where the semi-final and final were supposed to take place at Wembley, but the competition has had to be put back to 2021 following the Coronavirus epidemic.

The forward has revealed that he was ‘gutted’ that the competition couldn’t go ahead, before tipping both Greenwood and Saka to give the England boss a big decision when selecting his squad for the tournament.

“Nah I was gutted. Obviously I’ve been doing my thing this season and I was ready to go,” Sancho told SoccerBible.

“I don’t mind it being pushed back though. I feel like the England squad has a lot of players who are interesting at the moment. It’s going to be interesting to see who makes the squad.

“The players we have now are great and the young players that are coming up now like Bukayo Saka, Mason Greenwood – these guys are talented. It’s interesting to see what they’re doing week in, week out.

“They’re doing a madness so it’s going to be a very tough decision for Gareth Southgate to make.

“Again it’s healthy competition and you’ve just got to do your thing and everyone is going to be doing their best. It’s exciting to see.”

Would Southgate already be considering calling up Saka or Greenwood to the first-team squad? Could either potentially make the squad for the upcoming fixtures with the squad to be announced on Tuesday?