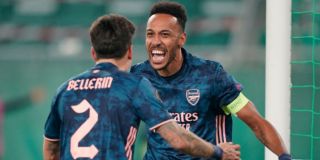 Has Bellerin’s return to prominence sneaked under the radar? (Opinion)

Hector Bellerin has quietly gone about his business following a number of reports linking him with a move away from Arsenal this summer, and I can’t help but be impressed.

I won’t lie to you, I was very much keen on the Spaniard being allowed to leave this summer, with Ainsley Maitland-Niles in the thinking to take over the role in the long-term, and with that sale to provide extra funds to bolster other areas.

Arsenal didn’t let us down by bringing in Thomas Partey despite their limited outgoings, and Bellerin has been an integral part of the team thus far, impressing in his wing-back role.

Hector has in fact started each and every Premier League match this term, while Cedric Soares has made very little impression when given the nod to start in the Europa League this week, or in the League Cup against Liverpool.

The Spaniard’s form has even led to both Bukayo Saka and Maitland-Niles to fight for the remaining wing-back role on the left, with both also enjoying an impressive campaign thus far, but little has been said on the 25 year-old’s return to top form.

Bellerin may well be fully settled into the new formation, and his new role as wing-back, and is flourishing once more, and I dare say that he could well be in line for his first return to the PFA Team of the Year since 2016.

Has our right-back’s return to form been understated? Who else is worthy of a mention as standout players so far this season?