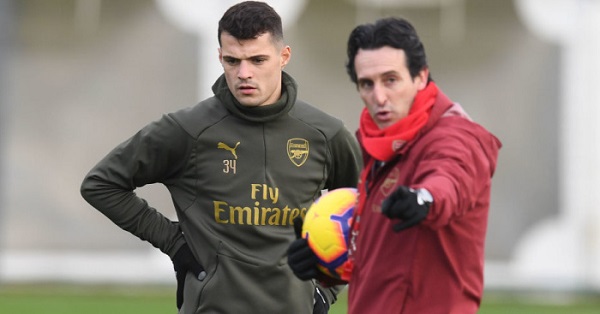 Has Granit Xhaka been held back by Emery’s tactics?

The problems between Arsenal fans and Granit Xhaka has been building up for a couple of seasons now, and culminated in him insulting the crowd when leaving the pitch against Crystal Palace.

He has been accused of laziness, unnecessary aggressiveness and lacking the ability to flourish at a top club like Arsenal. Conversely, Arsene Wenger, Freddie Ljungberg and now Mikel Arteta all rate him highly and he has always been one of the first names on the teamsheet despite his well-documented errors and hot-headedness, so why has he failed to live up to expectations in his time at the Emirates?

Well, according to the Liverpool legend Danny Murphy, it has simply been because the Gunners have been struggling and Xhaka needs to be in a team that is always on the front foot rather than being on the defensive most of the time.

‘If Xhaka was in Liverpool’s side with Henderson and Fabinho, he would look a hell of a player because he is technically good, a good passer, has a great shot on him and he has the ability with his great left foot to open you up,’ Murphy told talkSPORT (as quoted by the Metro).

‘But when you are playing in a team that is struggling a bit, he is a passenger defensively and a liability.

‘It is a dilemma for Mikel Arteta because he has a squad that needs a bit of tinkering.’

It is obvious now that Unai Emery was much too cautious of losing and would set his teams up defensively even against weaker opponents, so maybe that was the reason that Granit Xhaka didn’t flourish?

But now, with Arteta in charge, it looks like we are now going to be more offensive from the start of games and could help Xhaka show his best attributes.

Surely Arteta must see this as well, which is why he persuaded the Swiss International to stay at Arsenal. Could we see a completely rejuvenated Xhaka under the new regime?