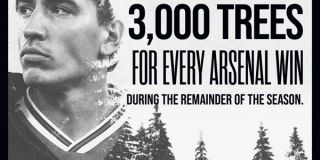 Arsenal’s Hector Bellerin is one of the few footballers who genuinely cares about the earth, well, publicly anyway.

Over time, he has been championing causes that would make the world a better place for us all.

His latest cause was a pledge to plant 3,000 trees every time that Arsenal wins a game after the Premier League returned.

After two matches, the Gunners have won no games, and it also means that the former Barcelona man hasn’t planted any trees yet.

Bookies Paddy Power, who are never slow to seek free publicity, has come to his aid with a cheeky cause of their own. The company has now pledged to plant trees every time that Arsenal doesn’t win a game.

They claim that the planet cannot wait for Arsenal to win a game before it would be saved as the Gunners are in terrible form now. What’s even more impressive is that they plan to plant 6,000 trees, double what Bellerin had pledged.

A spokesman for Paddy Power said as quoted by TeamTalk: “Since the Premier League has returned, an area the size of a football pitch is destroyed twice a week by Arsenal’s defence.

“We decided to step in and help hectare Bellerin out – after all, his team can’t defend their goal, let alone the planet.”

Arsenal man will become one of the first signings of the Laporta Barcelona era
31 December 2020, 14:15

“Maybe that would be a good bit of business.” Campbell reckons Arsenal star should be sold
28 December 2020, 19:30