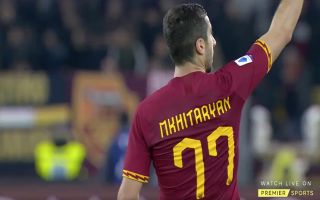 Henrikh Mkhitaryan has continued to drive home his intention of remaining in Rome and never returning to North London.

The Armenian joined Roma on loan from Arsenal last summer after he suffered from poor form following his move from Manchester United.

He struggled under Unai Emery and the Spaniard was happy to allow him to join the Italians at the start of this season.

He has rediscovered some of his best form with the Italian side and he looks determined to force through a permanent move from Arsenal.

He has again reiterated his desire to remain with Roma and has asked Arsenal to find an agreement with the Italians according to Corriere Dello Sport.

The reports quote Mkhitaryan as saying to Arsenal: “My time in London is over, I hope you manage to find an agreement with Roma because my desire is to remain.”

Both teams have been in talks over a new contract for some time now but there has been a struggle to reach an agreement.

The Gunners initially wanted £21 million for the Armenian, but they have since reduced that to just £10 million, but Roma is still looking for more discount.

The Italians could get a good deal if the attacker maintains that he isn’t coming back as Mikel Arteta has revealed that he will only keep players that want to stay.