Marcelo Bielsa has praised Mikel Arteta for how he sets his team up with an identity ahead of their match this evening.

Both managers will face each other again at the Emirates after their first league meeting ended in a goalless draw.

Just a point separates the teams and the game promises to be an exciting one between two teams that are committed to attacking football.

He was speaking ahead of the match and was asked what he thought about facing Mikel Arteta again.

He claimed the Spaniard is a great coach before praising him for keeping his team’s identity.

He then said Arsenal had different options for every position, which makes them unpredictable.

“His team has never lost their identity. They have different types of players for the same positions which demands knowledge of the style.

“We have to bear in mind that in that game they played half the game a player down so they were at a disadvantage, so any analysis made would not be a balanced one.

“We had so many shots, so one of the secrets to winning the game would be to increase our efficiency.”

Arteta has managed Arsenal against the Whites on two occasions eliminating them from the FA Cup last season, before the goalless draw at Elland Road late last year. 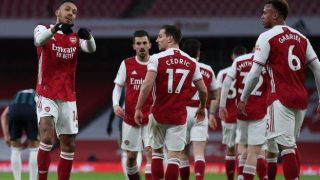