How about Henry as Arsenal manager – and Arteta as assistant? 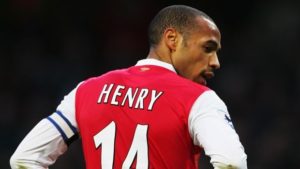 It was thought the the decision on the new Arsenal manager had been done when it was revealed this week that Mikel Arteta was meeting up for talks with the Gunners’ bosses, but now it seems that Arteta was only the first of many interviews with prospective candidates.

Next up on Monday is the Gunners legend Thierry Henry, who has made it clear that his biggest dream is to be manager of Arsenal, and is said to be a good friend of Josh Kroenke. Originally all the articles were saying that Henry was being interviewed to be Arteta’s assistant, but according to the Daily Mail, Henry is only interested in being the Top Man. This is an extract from the Mail report…..

Sportsmail revealed on Thursday that Henry was set to meet with the Gunners hierarchy but that will not be with a view to becoming part of Arteta’s backroom team.

Henry wants the top job and, while Arteta is in advanced talks and almost certain to be confirmed as the new boss, the club’s record goalscorer is keen to present his ideas on Monday.

It would certainly appear that the Board is very keen to continue Wenger’s legacy by bringing in lots of ex-Gunners that learned under him. But is the final decision still up in the air?

Are Arsenal fans more likely to accept Arteta if he came as Henry’s assistant?