How many of Arsenal linked XI should we sign?

With the current season having been suspended there has been a influx in transfer rumours doing the rounds, but how many of these supposed Arsenal targets should we sign? 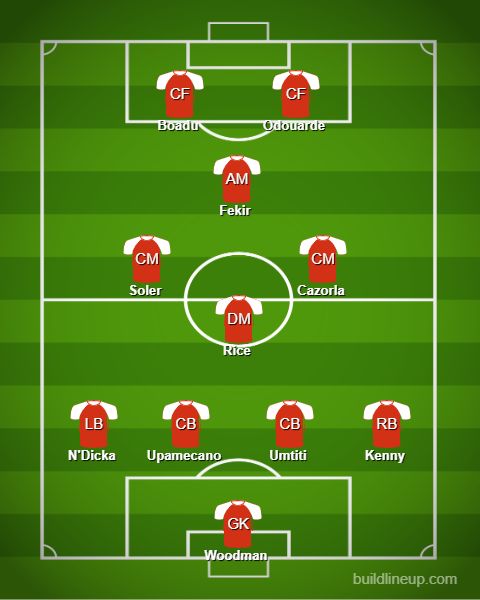 One position we haven’t been overly linked with strengthening is our goalkeeping slot, but there is a young future prospect we are potentially looking at. We are said to have sent scouts to watch Newcastle goalkeeper Freddie Woodman, with the 23 year-old enjoying a loan spell with Swansea.

Jonjoe Kenny is in a similar boat to the above. Another 23 year-old shipped out on loan, but he has been impressing in the Bundesliga on loan from Everton. Us as well as Spurs are believed to be monitoring his progress, and we all know question marks have been raised over Maitland-Niles future of late.

Umtiti and Upamecano are both talked about a fair bit lately, but I just don’t see us plucking up the money for either, and I’m sure you’ve read enough about them already to be fair…

Evan N’Dicka is another younger player, and is more of a centre-back that is comfortable at left-back, but he could well be an alternative to Pablo Mari. Arteta is believed to want a left-footed CB option in the team, and it is still early days for Mari. The Frankfurt defender is only 20, and a 6ft 4″ monster.

Declan Rice is a player you will all be unto familiar with, as is Santi Cazorla, and while I would love to see the latter make a return, I think it would only a bit-part role with a view to adding him to our coaching set-up in the long-term.

Soler is a player some of you may not be too familiar with, but he is a key player at Valencia, having come through their youth system. His current club are said to be in need of raising funds, and we could well take advantage of that.

I’m sure you all remember Nabil Fekir. We were strongly linked with a move for him last summer, only for Liverpool to seemingly beat us to the punch. Then after completing a medical the Reds pulled out of the deal, and he eventually left for Real Betis instead. After another impressive campaign, we are said to be keen on reigniting our interest.

Both strikers in the team are both that I like a lot. Whether you rate the Scottish Premier League or not, Odsonne Edouard has absolutely smashed his way through that division this term, and is no doubt destined for bigger things. Boadu is younger, and only in his first season as a first-team regular, but is already boasting 14 goals from his 24 league outings for AZ Alkmaar. I’d love to sign both but fitting them in the team could pose problematic…

Which would you prioritise?

Ndidi on Arsenal “I think we can get something out of the game”
Focus on Leah Williamson (Beginners guide to the Arsenal Womens squad)
Man City want Kieran Tierney to replace Zinchenko?