How many years does Laurent Koscielny have left at Arsenal before his return to France? 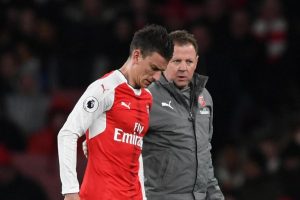 Arsenal’s most influential defender for the last few years has definitely been the veteran French international Laurent Koscielny, but at the grand old age of 32 he cannot be expected to keep up with the pace of the Premier League for too much longer.

And it seems that our captain has revealed to the Lorient president Loïc Féry that he intends to return to France before he retires and specifically to his old club Lorient. Fery said on French radio: “He told me last week in London that he wanted to end his career at Lorient. I still hope that he has a few more years at Arsenal.”

Perhaps a few more years is unlikely but LK6 does still have a contract that could keep him at the club until 2020, but with young upcoming defenders growing into his role it is unlikely that he would be playing regular first team football until the end. When you see that a previous top international like Per Mertesacker, who has only just turned 33 has already announced that he will be retiring from football completely next summer to concentrate on coaching, is already unable to play in many top flight games, it is entirely possible that Koscielny may be returning to France sooner than we think…