How much should Arsenal demand for Theo Walcott? 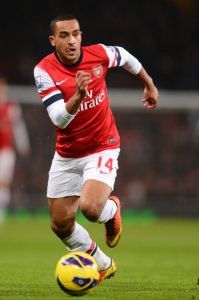 In these days of extremely inflated transfer fees that reached its zenith when Neymar moved to PSG for 200million euros, but has the inflation even reached its peak yet? Already this month Liverpool have paid Southampton 75m GBP for the defender Virgil van Dijk and now have a great warchest to bring in reinforcements themselves to drag them out of the relegation dogfight.

There have been many consistent rumours saying that Theo Walcott’s old club are keen to rescue the Englishman from his exile in the wilderness at Arsenal and the Saints definitely have the funds to make it happen. The Gunners longest serving player has not started one Premier League game this season, and if he stays with us he will have no chance of making the England team for the World Cup in Russia this coming summer.

Southampton have been linked with Walcott more than anyone else, but Everton and Newcastle are also claimed to have an interest, and Theo’s agent Warwick Horton has come out and said: “I know that Theo is keen on playing in Italy. We will take any offers that come in from Italy into consideration.”

The Saints boss Mauricio Pellegrino was recently asked about Walcott and although he didn’t rule out a potential move, but equally he wasn’t willing to overly confirm there was an interest.

He said: “There are many players that we have interest in. I can’t say anything because, obviously Walcott is an excellent player, but I can’t confirm this. We are in the market ready to try to bring somebody that wants to come but I know it will be difficult. In January it is not easy to bring in players but the market is huge and I think we will have some opportunities. We have got a couple of targets, four, five, six targets. We have confidence that someone else can come and it will be great for us. We are looking for a player that can improve the level of the squad. In the market you never know until the end.”

Wenger was also asked about Walcott’s future recently and although he declared that he wanted him to stay, he admitted that he heard of a possible move away and didn’t rule it out, but how much should Arsenal put on the winger’s head?

Alex Oxlade-Chamberlain was sold to Liverpool for 35m GBP in the summer, and it has been claimed that Arsenal are looking for a similar figure for Walcott, who still has 18 months remaining on his contract. I’m not sure if we would actually see a bidding war for Walcott but I do think that Southampton is his most likely destination.

How much do you think he is worth right now?