The Arsenal transfer rumours linking us with the Turkish international midfield star Arda Turan were quite understandable after his current club FC Barcelona moved to bring back Denis Suarez from Villarreal this summer and Turan had struggled to break into the first team last season.

Just as his technical and creative ability make him the typical sort of Arsene Wenger signing, however, they also made me wonder why Arsenal would need another player similar to the likes of Jack Wilshere and Mesut Ozil. It would not be the first time that our manager signed a player that most Arsenal fans and football journos thought was surplus to requirements though.

Even the transfer of Mesut Ozil was questioned at the time as a proper defensive midfielder and another striker seemed to be more needed. But we did lose the services of a Turan style player in Tomas Rosicky this summer and you can never be sure how much football we will get out of the injury prone Wilshere, while Turan at his best could walk into almost any team and Metro is reporting that Wenger is ready to pay the cut price fee of £20 million that Barcelona are supposedly ready to accept and add the name of the Barca star to those of Granit Xhaka, Rob Holding and Takuma Asano. 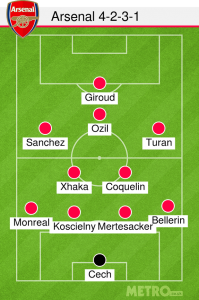 The theory is that Wenger is planning to use the Turk on the right side of an attacking midfield three and when you see the Arsenal XI that this would provide it does look pretty tasty. Maybe I would put Ramsey in one of those central positions and would be happier if Arsenal were to add a top quality centre back with more pace than Mertesacker but I have to admit that I like the look of this Gunners team. How about you?