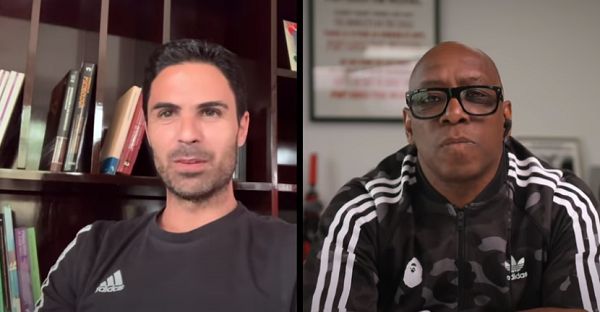 Ian Wright has moved to praise the decision by Arsenal to appoint Mikel Arteta in charge this season, praising the effect he has had on all aspects of the club in short a space in time.

The manager took over following a dismal campaign under Unai Emery, with Freddie Ljungberg unable to bring any improvement in his short temporary spell in charge also.

Under the Spaniard, wins were still not hard to come-by in the early stages, but from early on you could see a different team on the field. The players looked the same, but the team was playing with fight, hunger and a newfound drive which had been missing for some time.

Wins have finally found us of late however, and we just managed to win three consecutive league games prior to the suspension of football, and there is no doubts that the decision to bring Mikel Arteta in as coach was a clever one.

Ian Wright is the latest to back up the move, highlighting the new coach’s character traits which set him apart.

‘If we’re looking at somebody as a coach with ambition and drive and determination then, without a shadow of a doubt, we’ve got the right person,’ Wright said.

‘I did an interview with David Luiz the other day and when you listen to him speak about Mikel Arteta and what he wants and what he expects and the fitness and the drive that the players now have and you can see that there was a change at Arsenal.

‘People are saying we’ve drawn a lot of games but there was a change in the output of the players, the intensity, the determination to try and execute the manager’s philosophy.

‘And I think, as time goes by, hopefully with help from the owners, he will be somebody that if he is stuck with which we probably will then we will be going in the right direction, without a doubt.

‘He’s somebody that’s driven to be successful. You can see that in him’

Does anybody believe that Mikel Arteta could struggle after the suspension of football? Do we believe that Arteta will be backed by the club for years to come?