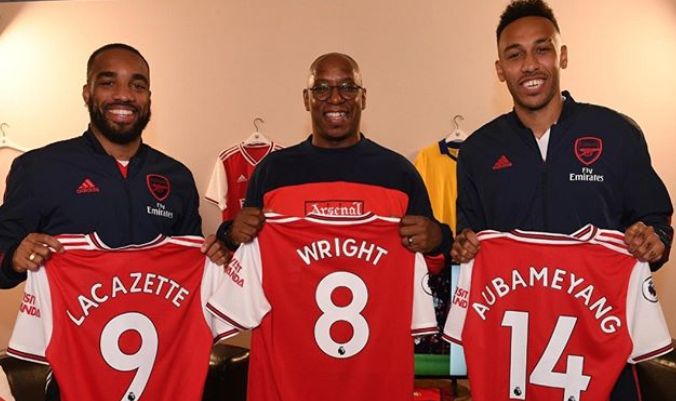 Ian Wright proves he is an Arsenal legend yet again

Hello friends everywhere. Hope we are in another mood to rejoice this evening after beating Everton? I fully expect us to end the match as victors. It won’t be too bad if we also end the match 4 goals to the better (Why do I love four goals this much?).

Ian Wright is a very lively fellow! I was unfortunate to not really get to watch him play much for Arsenal, but from what I have read or heard about him he was an Arsenal legend who contributed a lot to the Arsenal’s cause. He scored lots of goals; and even up till this moment, people still compare other Arsenal strikers to him. What a record breaker he was then.

Over many seasons, I have always watched him do sport punditry and I am always seen the passion he exhibits when talking about Arsenal. There are times he would be involved in heated arguments with other football analysts. There are times he almost lost his temper on television, all because he wants to defend his team, Arsenal.

Part of the reason Wright is so likeable to me, is his big smile, charm and self-effacing personality. Most importantly, Wright knows how to laugh at himself and must be one of the most infectious characters in football punditry. Who can forget his celebration against Chelsea when Bellerin scored against them? He celebrated with his tongue out, probably imitating one of the Chelsea players’ celebrations, after he scored their second goal. That moment was so funny and I could not help laughing out loud for so long. Wrighty made my day then.

On Thursday after the victory against Olympiacos, Footage showed the away fans in one corner of the Karaiskakis Stadium chanting Wright’s song – “Ian Wright, Wright, Wright.”

The 56-year-old responded to the fans, shouting: “I love ya, I love ya!” as he gives a thumb up to his supporters. Is this not lovely? Even as a football pundit, he still supports the club with so much passion. I really love this man and I pray to meet up with him soon.

Wright is currently mourning his former primary school teacher and I feel his pain. Wright seems to be a man of passion, he happens to be a man who appreciates people’s influence in his life and he knows how to connect with the club he once played for. I mourn with Wright on the death of a teacher who Wright says was the first male figure to have an impact in his life. But at the meantime, I implore every Arsenal fan to stand up for the real Arsenal legend, Ian Wright. We are Arsenal and we are proud.