“I’m sure Arsenal fans are thinking ‘why don’t we play our No 1 goalkeeper?’” Pundit slams Arteta

Mikel Arteta has been slammed for naming Alex Runarsson as Arsenal’s goalkeeper to face Manchester City in the Carabao Cup quarterfinals.

The Gunners have been on a poor run of form lately and the game offered them the chance to get a morale-boosting win.

However, they fluffed their lines and fell to a 4-1 loss.

Facing a team like Manchester City, Arteta decided to field his second choice goalie when he could have played Bernd Leno as he did in the last round against Liverpool.

It was a baffling decision and the former Dijon man gave a shocking performance.

One person who wasn’t impressed by his performance and Arteta’s decision to even play him in the first place is Jamie Redknapp. 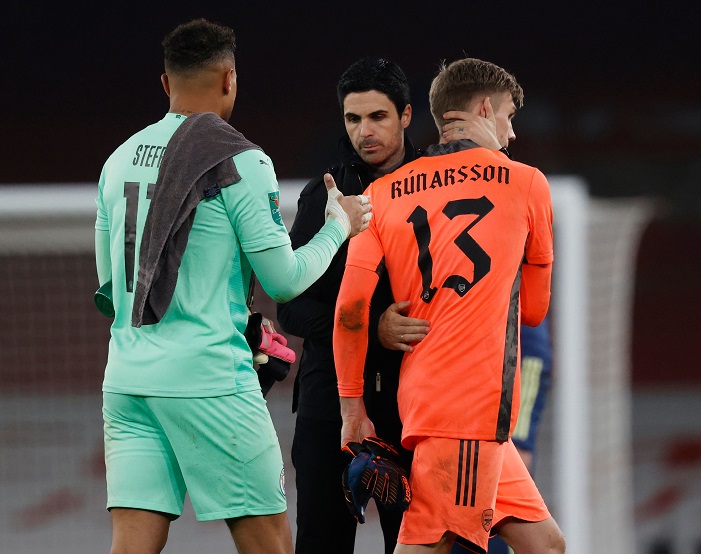 He was speaking on Sky Sports and he admitted that goalkeepers do make mistakes, but Arsenal should have started Leno.

“I almost feel bad jumping into his nightmare,” Redknapp said on Runarsson’s mistake for City’s second goal via Express Sports.

“People make mistakes, from a goalkeeper’s perspective it looks like he got himself into the right position but takes his eye off the ball.

“I suppose it can happen, these things happen to great goalkeepers in the past.

“He was at fault for the first goal then made a brilliant save from Gabriel Jesus. It’s a nightmare for the poor boy.

“I’m sure Arsenal fans are thinking ‘why don’t we play our No 1 goalkeeper?’

“Goalkeepers don’t need to rest, I know it’s the Carabao Cup but it’s a big game for him today.

“It didn’t really make sense playing him in the first place.

“That being said, hopefully, he gets over it quickly and it’s one of those things.

“You’ve got to pick yourself up, what more can you do?”