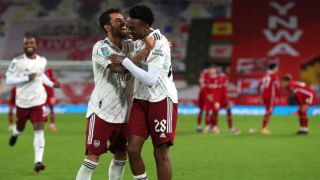 Image: Arsenal v Liverpool is amongst the most exciting as confirmed by PL stat

The Premier League has stated that clashes between Arsenal and Liverpool have created more goals than any other rivalries.

The Gunners will play host to the Merseyside club in tonight’s late clash, with the scheduled kick-off time of 8PM (GMT).

It will be no shock to fans when you consider that there was a combined 10 goals in our last two league matches, with the PL claiming there has been 166 goals from their previous fixtures, and likely more to come tonight also.

Are we expecting lots of goals this evening?