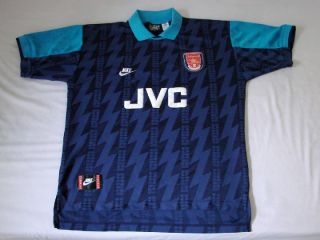 Arsenal fans are hoping that the latest leak of their supposed ‘third kit’ prove to be true, and we here at JustArsenal have to agree.

The leaked kit bears a strong resemblance to those of the two blue away kits between 1994 and 1996, which was predominantly dark navy blue whilst having a sharp electric bolt pattern incorporated into it.

There’s no real justification for a team as bad as Arsenal being allowed to have a shirt this good pic.twitter.com/oI5IFNkT87

Some rival fans have even commented their hate for liking the leaked Arsenal’s edition,

While there was the usual hate that you see on all social media, I’ve picked out some of the happier comments to share.

Best I’ve seen in a decade

What are your thoughts on this throwback to 95? Will you rush to get your hands on one? How many of these will be sold with Saka on the back this summer?