Mesut Ozil and Matteo Guendouzi have been axed from the Arsenal first team and the duo can’t hide their unhappiness at being asked to model the club’s away jerseys.

Ozil has been a problem for Arsenal as they attempt to ship him out to another team while Guendouzi fell out with Mikel Arteta during the Premier League restart.

The Frenchman didn’t play again after his on-field antics in Arsenal’s game against Brighton.

Both players might be sold before next season starts, but for now, they are on the books of the Gunners and they have to fulfil obligations just as other players have to.

One such obligation is modelling the club’s jerseys and their facial expression in the latest shoot screams disinterest, as revealed in the Sun.

Arsenal has just launched a new away kit that they might pull on when the travel to Liverpool towards the end of next month.

The Gunners drew inspiration from the marble halls of Highbury in their latest offering and it’s the design they asked their players to model.

While the likes of Pierre-Emerick Aubameyang were smiling, Guendouzi and Ozil showed nothing to suggest that they were happy to partake in the shoot. 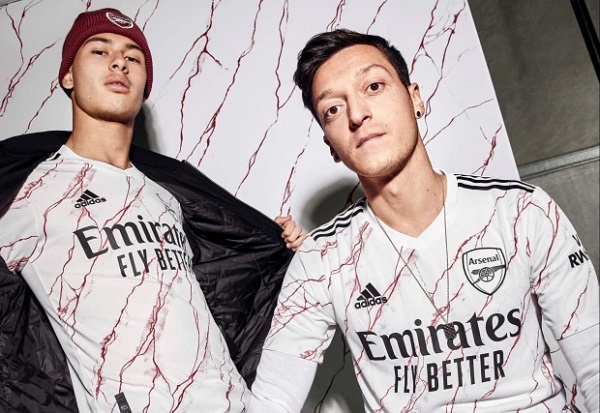