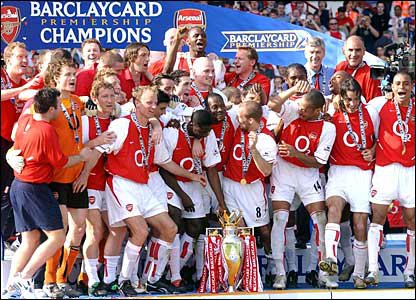 Lucky enough to attend the film premiere, I have already written my review for Arsene Wenger: Invincible.

I felt though I should write something to acknowledge the documentary that this week is available on Amazon.

You can watch Arsenal’s own documentary on their website.

From my own perspective this is the story of the Invincibles.

In the summer of 2003 Gooners were concerned.

While Roman Abramovich ploughed millions into Chelsea, Arsenal’s only business was 1.5 million on Jens Lehman.

This was an early indication of how building the Emirates was tightening the finances.

Many felt Pascal Cygan hadn’t proved a suitable replacement for Tony Adams and the manner of how we threw a 12-point gap away in February to relinquish our title was proof we needed to invest in a world class defender.

To the bemusement of many, Mr Wenger’s answer was to teach Kolo Touré how to play centreback.

The Ivorian, the season before, had been an energetic utility player but there were zero signs he could be Sol Campbell’s long term defensive partner.

Many called it the cheap option.

Little did they know that Kolo would play more than anyone else in that campaign.

Arsenal lost the Community Shield on penalties to Man United.

The biggest talking point though was Francis Jeffers getting sent off.

Just a couple of months removed from Sol Campbell feeling cheated when he felt he was wrongly red carded in a draw with United, this added to the animosity between the two clubs.

This would be crucial for when they would next meet.

Our disciplinary record continued to be questioned when Sol Campbell (already being investigated by the FA for an incident in the Shield) was sent off on the opening day of the Premier League against Everton.

Despite playing for 70 mins with 10 men we beat the Toffees 2–1, the first of 4 consecutive victories.

Our win at Man City was thanks to a mistake from a certain …. David Seaman

In hindsight this is the month where the Invincibles nearly never happened.

A Pires ‘dive’ at home to draw with Portsmouth is often highlighted when our fanbase complain that zero decisions go in our favour.

When Inter Milan scored 3 at Highbury it sent us to Old Trafford vulnerable.

We were heading for a credible point till Viera was caught kicking out at Van Nistelroy. In reality our captain’s anger came from the perception that the striker had cheated in previous encounters, and this was the cherry on the cake.

Seconds away from a draw Keown was harshly judged to have pulled back Forlan for a penalty.

Van Nistelroy never missed from the spot; this kicks the closest from us not going unbeaten.

After he smashed the bar Keown celebrated the final whistle by jumping in the striker’s face while others shoved him.

Technically we were in the wrong but as a fan I was proud to see the players fight for the shirt and care, something we have lacked for years in our dressing room.

In total the ‘Battle of Old Trafford’ led to 6 of our players being fined and 3 suspended.

Mr Wenger would later claim this motivated the squad making them feel it was them against the world.

The mentioned suspensions plus injuries meant that Arsenal had to rely on some of their squad players.

Our rare victory at Anfield saw the team praised for their fighting spirit, the consensus being that they wouldn’t have won from a losing position the year before.

A 2-1 win over Chelsea was seen as us putting the Blues in their place, their first defeat in the Abramovich era knocking them off the top of the table.

While things were going well domestically, defeat in Kiev meant we had one point from our opening three Champions League games.

We were seconds away from heading out of the Champions League when Ashley Cole popped up in stoppage time with a header to beat Kiev.

This was the month when Thierry showcased why he was many favourites for the Ballon D’or.

He helped destroy a declining Leeds at Elland Road before a sensational performance in the San Siro gave us a famous 5-1 win over Inter Milan.

Injuries meant a young Gael Clichy was starting games on our left side in front of Cole.

Fulham became the first side to stop us from scoring at Highbury in our 48th attempt (more precisely Van Der Sar).

Despite the 0-0 draw setting a record for how many games undefeated since the season started, the dropped points saw Chelsea overtake us.

Draws at Leicester and Bolton saw Man United finish the year top of the table.

That was despite the media now putting more attention on our unbeaten run.

A Pires goal at Southampton meant we had played all 19 teams (the halfway point) and not lost in the League.

A 2-0 win over Moscow meant we topped our Champions’ League group while a certain 16-year-old became the youngest scorer in our history in the Carling Cup … Cesc Fabregas.

A 4-1 win over Middlesbrough started our best winning sequence of the campaign (9) which saw us open a gap between us and the chasing pack.

We would face ‘Brough 4 times in 20 days (the Prem, the FA Cup and two legs of the Carling Cup).

There was controversy at Villa Park when a quickly taken Henry free kick was allowed to stand.

A young Gunners squad had got to the semi-Final of the Carling Cup, but Mr Wenger chose to not play his strongest side despite being so close to a Cup Final which led to us losing on aggregate 3-1.

The signing of Reyes was a record transfer for us at the time.

Reyes made a dream full debut in the FA Cup against Chelsea.

1-0 down at half time the Spaniard turned the tie around in the space of 5 minutes with two stunners, one a screamer from 20 yards.

5 straight wins saw up go 7 points clear, our highest lead of the season at that point.

Perhaps the pivotal day of the whole season was when we won at the Bridge at lunch time, then watched Man United be held by Leeds at Old Trafford.

Arsenal’s football was so good at this point that Portsmouth ended up applauding our goals and gave Thierry Henry a standing ovation in the Cup at Fratton Park.

A 1-1 Highbury draw with Man United left Sir Alex Ferguson to concede that the title race was over.

Talk now was could the Gunners actually go a season unbeaten, and could they win the treble having qualified to the last 8 of the Champions League and yet again in the semi-Finals of the FA Cup?

A 1-1 draw at the Bridge in the Europe meant we had an away goal to take back to Highbury.

Sandwiched between the two legs with Chelsea was an FA Cup Semi Final with Man United.

How Arsene Wenger handled that week remains debatable to this current day.

With hindsight some gooners wish all players were rested to prioritize the Champions League second leg, while others were not happy the likes of Henry were rested in the Cup where we lost 1-0.

The moment Lampard equalised at Highbury it was clear our players didn’t have the energy to find that next level. Chelsea took advantage with a Wayne Bridge goal meaning we had been knocked out of two tournaments in the space of 4 days.

We then had to play Liverpool 3 days later clearly physically and mentally exhausted – and we were 2-1 down at half time.

Mr Wenger has admitted that’s when he realised, he had underestimated the physchological impact caused by the losses.

Fearing that they were watching the Gunners bottle their entire season, Henry claims he’s never felt Highbury with that much anxiety before.

The striker took the game by the scruff of the neck, scored a hat trick and Highbury took one collect sigh of relief.

We had thrown away 2 trophies, but this assured everyone we were still in control of the title race.

The following Friday Henry scored 4 at home to Leeds.

You could argue that week was the best Henry we ever saw.

As we were getting ready for the North London Derby, we had an unexpected boost of hearing Chelsea had lost at Newcastle, meaning we only needed a draw at the Lane to be Champions.

Not the type to play for the point, we raced into a 2-0 lead. Spurs rescued a 2-2 draw but seemed to forget that result meant we were Champions.

Originally agreeing to security that we wouldn’t celebrate, Henry was so bemused by Spurs’ reaction to the result, he led celebrations at the away end.

I just wish Sol Campbell had joined in…

There are those who try and rubbish going unbeaten by pointing out how many fixtures we drew, and that other Champions recorded bigger points tally.

Instead, we were crippled by the pressure of making sure we went the season unbeaten.

Even with the title won, it now would have felt like failure if we had lost a game, as that’s what everyone was talking about.

It’s not a coincidence that a 0-0 draw with Birmingham and a 1-1 draw at Pompey was the most nervous we had looked all campaign.

If someone said that 18 years later, we would still be waiting for another title, no one would have believed you.

Arsene Wenger though was forced to break up the Invincibles earlier than most due to the upcoming debts caused by building the Emirates,

Arsenal naively believed in Financial Fair play, hence why they wanted to build a stadium while being self-financed.

It’s become a tradition for a team to be predicted to better then what we did?

The moment they fail suddenly it’s not important.

The likes of TalkSport will downplay the class of 2003 -4 but fail to mention that if so, simply why it hasn’t been replicated.

We took it for granted, thought it would last forever.

Most of all …. they stole our hearts.

They took a step into immortality

They will live forever

A tribute as Patrick Vieira set to make a sentimental return to Arsenal
11 October 2021, 10:30