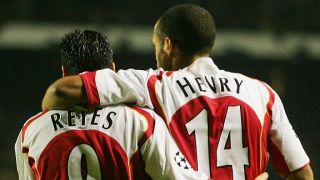 It’s been a year since the death of Jose Antonio Reyes, the one member of the ‘Invincibles’ who is no longer with us. From the age of 11 he was predicted as his country’s next big star, some statement given the young talent Spain would produce. In hindsight you could argue he never quite reached that potential.
For example, he wasn’t part of the Spanish squads who won the World Cup and 2 Euros between 2008-2012. Yet trying to tell that to his hometown club Sevilla. Over two spells he would play over 200 times for them.

The first time he left Sevilla, his chairmen told him the club were in financial trouble and could do with the 17 million that Arsenal paid for his services.

The 2nd time he departed, he was in tears as he held aloft the Europa League Trophy (the third consecutive final he had won with his boyhood club). To the community of Andalusia, one of their own had come home and done good, winning three of the 5 European trophies in their history. The kind of success they envisaged when he skipped all their age groups and debuted as their youngest ever player at 16. He just went the long way round of doing things ….

As much as Sevilla loved him, the feeling was mutual.

The nation’s oldest sporting club is obsessed purely with Football. It’s a City who are proud of their own, old school you could say in family matters, looking after your own, and never forgetting where you came from is important. Reyes never forgot his roots …. a great gift but also a flaw in his career.

From day one at Arsenal he seemed to struggle to adapt to England. His three seasons in England were dominated by reports of being homesick with the club going to the lengths of flying over his parents and brother to live with him. This might have been Arsene Wenger’s reason to sign him in the middle of the 2003 season, giving him a few months to get used to the physicality of the Premier League.

His first two goals as a gunner knocked Chelsea out of the FA Cup, but it wasn’t till the next campaign, we saw why he was our most expensive transfer at the time. The Spaniard scored in 6 consecutive matches. To put that in perspective this was only the 2nd time in his career his goal tally was double figures (it would never happen again).

The winger looked more comfortable in the Champions League, where en route to our only appearance in the final we would change from our League formation into a 5-man midfield, Reyes and Pires swapping effectively from the wings into the number 10 role.

Whatever he said to Mr Wenger about being happy, stories in his homeland would never go away. Whether it was the weather, the food, the language, etc, there was always something wrong.

On the pitch Man United were now tactically targeting him believing he wasn’t tough enough. A Darren Fletcher would start purely with the instruction of kicking him.

The Spanish press obsessed with him since a teenager wanted to know why he was playing second fiddle to Thierry Henry and not developing how they assumed he would. They went to the level of tricking him on a radio station saying there were ‘bad people at Arsenal’ thinking he was talking to Real Madrid officials.

When eventually he was swapped with Baptista our manager made it clear how he felt unfair tactics from those at the Bernadeau had distracted the youngster, Meaning he never settled like a Fabregas, Alonso, Torres, etc.

To the likes of Marca, it was the perfect narrative. The man heralded as Spain’s future was now back home at the biggest club in the world. This would be the year they accepted he might never get to the level of a Raul.

While playing his part in winning La Liga (6 goals in 30 games), he was never going to be a Galactico, and with Beckham and Roberto Carlos departing, money was instead invested in Robben and Sneijder.

Suddenly the player had a crisis in confidence. In his mind he was too big for Arsenal, but it turned out too small for Real. His agent hinted that maybe he gives it a second try in North London, but that bridge had been burned.

Atletico Madrid paid 12 million for him but after one season he hadn’t managed a single goal in 35 games so, as Spain were winning Euro 2008, the man that was once called their future was being loaned out to Portugal….

His spell in Benfica was a turning point. Not because he won the cup, but he met Sanchez Flores. So, when Flores happened to be offered the Atletico job, he wanted to keep Reyes, having worked with him for a year in Lisbon. Playing with the likes of Forlan and Aguero, Reyes was seen as crucial to them winning the Europa League in 2010. He won the trophy again in 2012 although had lost his mojo when Flores left.

In his 5 final seasons with Sevilla he would only score 3 la Liga goals but there was something romantic about those European Nights. It was almost like it was his destiny.

He started the 2014 Europa League Final, captained and made 2 goals in the 2015 win, injury meant he missed the 2016 Final but he still got a medal.

In June of last year, the same month his son signed for Real Madrid ‘s academy, Reyes, along with his cousin Jonathan, died after a car crash. I should stress that police had denied reports of speeding at 135 mph stating the vehicle was moving approx. 66-85 mph.

If he wasn’t quite Spain’s next big thing it was because he happened to be playing in their golden generation. This was still a young man who lived his dream. He won An FA Cup, A Portuguese Cup, The Premiership, La Liga (as well as Segunda), the UEFA Super Cup and 5 Europa Leagues.

His funeral was in Sevilla. The night before the ceremony, his coffin was taken to their stadium with thousands on the street. He wouldn’t have had it any other way. These were his people; he was one of them. His club, his City, where he was so proud to have given service during their European successes.

He had come home one last time…

Once a Gooner Always A Gooner x

Watch ALL of Reyes goals for Arsenal HERE