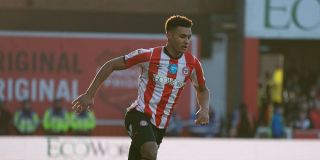 Ollie Watkins has opened the door for a move to Arsenal in the future by claiming that it has always been his dream to play for the Gunners.

The Brentford attacker has been in the form of his life this season despite only being converted into a striker last summer because Neal Maupay left them to join Brighton.

He has scored 22 goals for the Bees this season as they chase promotion back to the Premier League.

His form has attracted the attention of several English top-flight sides, however, he would rather make a move to the Emirates and he also claimed that Thierry Henry is one of his sporting heroes.

“Yeah, the dream,” he said via Twitter. “That’s the dream to play for Arsenal one day. But, you know, it’s a long shot.”

“Thierry Henry is my sporting hero, I grew up watching him as I support Arsenal,” Watkins has previously said.

“I try to base my game on his, by driving at defenders and looking to make something happen when I get the ball.”

Mikel Arteta is making serious progress as but the next summer would be an important one for the Spaniard. Should he secure European football, Pierre-Emerick Aubameyang may well want to remain at the Emirates. However, if Aubameyang does leave, Arteta may have to turn to another attacker like Watkins.