In times of crisis, let’s look at Wenger’s best moments at Arsenal 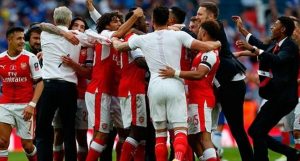 Understandably, Arsenal fans are divided on their opinions of Arsène Wenger’s recent transfer mistakes leading to the team’s underperformance at the start of the League. Many even joke that a Frenchman brought back to the old continent from Japan in the distant 1996 can’t teach the English how to play any better than they already know. However, the true Gunners supporters know that nothing in soccer is plainly black and white. Moreover, Wenger’s rare devotion to the club in crisis for 21 years now and his best moves so far prove that there’s still life in the old dog.

Let’s at least not forget the 10 big trophies, including 3 Premier League titles and 4 Charity Shields, and the club’s seventh FA Cup’s victory against Chelsea earlier this year. Soccer is an art that takes years to master, and these inconsistencies at Arsenal are just part of the game for any club. Learning how Arsenal coped with failure over the years will certainly help us make a well-informed bet when it comes to supporting the club in this manner. However, remember it is always easy to make an online bet from your smartphone on a football match, as long as the application is customer friendly.

The 1998 Double
In two years’ time after stepping as a chief of Arsenal, Wenger managed to introduced such significant changes to the training methods of the team that in 1998 the club grabbed its second Double of capturing the League’s title and the FA Cup in the Gunners’ history. Before the 1990s, only 4 great teams had managed to grab the FA Cup and Arsenal’s last victory at the Premier League was in 1989 under George Graham. The 1998 Arsenal’s victory over Newcastle was the moment of truth for Wenger to prove that he is up to great things.

Bergkamp’s Greatest Moment & the Second Double under Wenger
Arsenal is the only club to win the Double for the second time under the same management and its initial period of glory of the 1990s extended way into the 2000s. The Gunners didn’t start the 2001-02 season at such great heights as anticipated but managed to turn the tables later in December, as since then the club didn’t lose any of their last 21 games to end up beating Manchester United to the title. Arsenal’s stars on the field at that time were the Dutch Dennis Bergkamp (contracted a year before Wenger by the previous manager Graham), and Thierry Henry who soon became Wenger’s brainchild brought back from Monaco for only £11m. Fifteen years ago, Bergkamp’s winning goal at the match against Newcastle is still seen as the most spectacular moment in the club’s history.

Wenger’s Best Transfer Deal
Speaking of true legends on the field, Wenger has proven in the past to know how to sniff a good deal when it comes to transfers. This was the case with signing up Thierry Henry who by that time only had a somewhat mediocre record, lasting only six months in Turin before ending up at Juventus who obviously underestimated and sold him for the record low of £11m to the Gunners. Arsenal’s chief made a very calculated move in targeting Henry, as he already knew his style from Monaco and had no doubts that he’d do a better job as a striker rather than a wing that he was at Juventus. With his record of 200-odd something goals, Henry is now regarded as the best-attacking player in the Premier League.

The 2004 League’s Victory
Following the second Double in 2002, Arsenal entered firmly into yet another golden era of invincibility, with its unpredictable victory at White Hart Lane in 2004 when the team only needed one point to steal yet another Premier League’s trophy. The season of 2003-2004 was a watershed for the team, as until the end of the year the Gunners would’ve played 49 matches with no losses and only 13 draws, leaving Southampton, Manchester United, Birmingham, Fulham and Leicester in dismay. Previously, only Preston North End had managed to swing such a spectacular season, but Arsenal scraped this record from history books.

Wenger’s FA Cups Record
In modern day soccer, Wenger is the only chief to have won the FA Cup seven times. Here are our three favourite ones.

2005 FA Cup
Arsenal didn’t grab the gold in 2005, but the match against Manchester United marked the highlight of yet another successful year for the Gunners. Grabbing its third FA Cup since Wenger, the team proved that it truly belonged to those professional tournaments such as the Premier League and the FA Cup. Nevertheless, for the following 6 years luck evaded the club, as no trophies were brought back home. This said, trashing Tottenham 5-2 and Giroud’s famous ‘scorpion kick’ against Crystal Palace in 2012 were good signals that Arsenal wasn’t done yet.

Ramsay’s Best Moment in 2014
The 2014’s victory is an example of how unexpectedly the team can recover from a long period of defeats, as the match with Hull looked predetermined until 8 minutes before the end of the second half when Cazorla, Koscielny and Ramsey showed an undeniable team effort to eventually get Arsenal back to the top.

Beating Chelsea at the Start of the Year
Every true Arsenal fan has heard about the ongoing rivalry between Arsenal and Chelsea. There’s no secret that scraping the FA Cup from Chelsea at a match that finished 2-1 earlier this year was probably the most significant victory for the Gunners in the past decade. This is Wenger’s seventh FA Cup in only 20 years of training Arsenal and the club’s 13th such trophy, so you can do the maths yourself. Speaking to The Guardian, the chief himself admitted that this was his proudest moments, as there was nobody left to believe in the club anymore. Judging from this incredible display of skill and luck, of course, fans and pundits should prepare for pleasant surprises later in the current Premier League’s season. The bettors among you might find it handy to check how Arsenal is currently faring at BestBettingApplications.co.uk.

Which season was Le Prof’s best in your eyes?