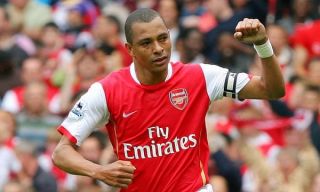 Invincible laments Arsenal struggling to find a player of his calibre

Gilberto Silva claims that it is painful to see Arsenal struggle to replace him.

Gilberto Sliva has revealed that he is delighted to know that fans remember him and Patrick Vieira for the effectiveness with which they marshalled Arsenal’s midfield during their time at the club.

However, the Brazilian insists that he is not proud to see the Gunners suffer to replace him and Vieira.

Silva was part of the Arsenal team to become the first and only side to play an entire Premier League season unbeaten.

The duo presided over one of the meanest midfields in world football at the time before both left the Gunners.

Vieira left in 2005 before Gilberto left in 2008, but Arsenal has never managed to replace both of them, and that pains the Brazilian.

Gilberto added that Arsenal’s big problems this season have come from not having a good midfield.

Silva told Planet Football: ‘It’s nice when people talk about me and remember me.

‘Of course, I’m not too proud in terms of the idea that they never replaced me, but I feel proud that people think about me positively, despite the fact that it’s a long time since I left the club. This is a good feeling.

‘But, you know, from what I have seen over the last few years, it’s quite true, because me and Patrick Vieira especially had a great partnership and I haven’t seen Arsenal replace this.

‘I think it’s been quite painful for the team not to have stability in this position. They are paying a high price, but I hope at some point they find somebody who can fill the gap.’

Mikel Arteta has been working wonders with his current Arsenal team and the Spaniard will hope to get the best from his current midfielders for the rest of the season.

He is expected to spend more money in the next transfer window, and there is every chance that he could buy at least one new midfielder.