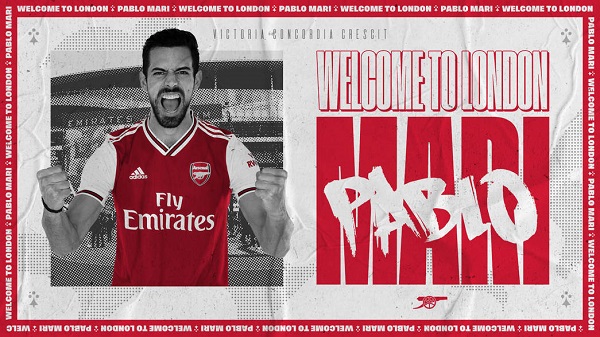 Integrating Pablo Mari into the back four is the next big task for Mikel Arteta.

Arsenal signed a new left-footed centre back this month and I can see how delighted Mikel Arteta is about the signing of Pablo Mari.

While discussing the player’s move to the Emirates, Arteta gushed about landing a left-footed centre back and discussed how the player gives them the chance to expand the field even further.

Now that Mari is available and he is expected to be a starter at Arsenal, the next question will be; who would be his best defensive partner?

Arsenal has struggled in defence this season regardless of the combination they have used at the back.

At the moment, it seems Mikel Arteta is still unsure of his best pairing in the centre of the defence.

David Luiz joined in the summer and he was expected to become Arsenal’s answer to its defensive issues but the former Chelsea man has been underwhelming so far.

Sokratis Papastathopoulos has been inconsistent as well, while he loves to dive into challenges, he isn’t confident on the ball and never really inspires confidence.

Shkodran Mustafi has been revived a little by the appointment of Arteta, but the German remains one mistake away from causing problems for his team and cannot be fully trusted.

Calum Chambers is injured and Rob Holding seems quite away from nailing down a regular spot.

At the end of the day, Arsenal’s defence has no stand out performer so far and David Luiz seems to be the right choice to partner Mari.

The Brazilian might be erratic in his defending, he is still better than the other options at the club right now.