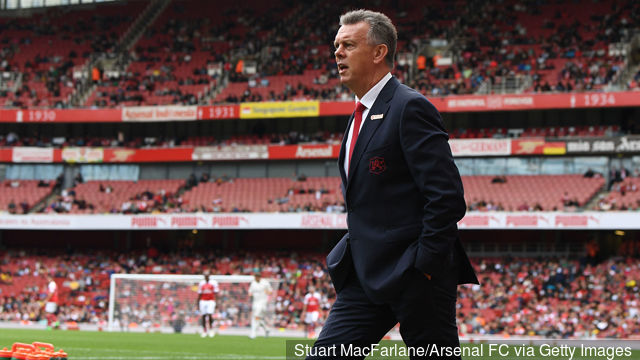 Is David O’Leary even qualified to advise Arsenal?

Is David O’Leary Qualified To Advise Arsenal? By Dan Smith

If I said ‘name an ex-Gunner with worldwide knowledge of the game who could come in and advise our board’, I’m not sure David O’Leary would be one of the first names that come to mind?

Even in terms of interviews with the media, television appearances, etc, for a man who has played for the Arsenal more than anyone else he has kept his distance compared to other legends.

O’Leary slightly tarnished his reputation when manager of Leeds when he felt he had broken up the dominance of us and Manchester United.

This was an ambitious young coach who like his squad believed in their own hype before they actually won anything. 2 European Semi Finals with young British talent made him a darling with the press, but in reality, he was unaware just how much he was being allowed to overspend, sums of money the Yorkshire club still are yet to get over.

He failed at Aston Villa, his last job in Europe. That was 13 years ago.

In 2010, O’Leary showed up in the United Arab of Emirates where he stayed for a year. So, if we are being kind and calling Al-Ahli top-flight football he was last involved at the highest-level 8 years ago.

So, this wouldn’t be the same as when we appointed Edu, a former gooner but who had done previous work and could boast a sound knowledge of the South American market which we can benefit from.

What contacts/sources does the Irishman have that makes him qualified for such a role? Maybe he’s been doing his homework, but, according to the Mail, clearly Raul Sanllehi doesn’t think that’s the case, disagreeing with Sir Chips Keswick’s opinion.

The Arsenal chairman has been part of our set up since 2005 but isn’t part of the team in charge of recruiting/scouting, etc.

That’s a network that has taken a long process to set up, and with Sanellehi’s CV he doesn’t need anyone’s advice, especially if it lacks credibility.

I would love us to adopt the Bayern Munich model, where ex-players are invited to the board, the more people who understand the club are around the better. But they have to have the qualifications/experience for the post, not just buddies with the top brass since taking an ambassador role. That’s what this kind of smacks of.

I much rather read our old centre back will be on the training pitch in charge of our defence, then I would see it as a step forward.

So, unless the Irishman has some sort of business ideas that can make us richer, or has secretly been scouting a select market, him advising us is not going to help. His appointment may even undermine Sanllehi and see him walk away?