Troy Deeney has claimed that the concussion protection rules in place are sufficient, but TalkSport seem to have been forced to remove their video clip on his comments.

The radio show posts a number of their interviews onto their Twitter page, and this one was no different as they posted here, but they have moved to remove the post.

Troy Deeney’s quote can be found below however, as quoted in the Mirror, and I actually believe that he has some valid points, but when he moves to criticise the science being used in the game to protect players’ careers is when I think his point fizzles out, as he defends the decision by the medics to allow David Luiz to carry on for Arsenal against Wolves yesterday.

“So what I would say is, from watching David Luiz for the next 20 odd minutes afterwards, he never looked shaky on his feet,” he told TalkSPORT’s listeners.

“His legs weren’t gone from underneath him, so they followed all the protocols in terms of he’s ticked every box.

“Then afterwards you don’t see anything other than blood to suggest he’s in a bad way.”

“At some point there has to be an element of trust between player and doctor. You do have all the protocols in place.

“At the start of the season you will come in and they will do – as well as testing your heart and all these different things you do – concussion tests, which is obviously a variation of questions, which will be repeated back.

“Some are very simple, which you should normally pass and get five out of five in.

“They will do those little tests on there, something simple like ‘Who are we playing today?’, ‘What’s the score?’, ‘What day is it?’.

“And because if you’re obviously concussed at all that will blur your memory and you might get it wrong, and that’s where they will go ‘All right there are certain things we need to start checking now'”.

Do you agree with some of Deeney’s comments, or is he completely out of line here? Do we think TalkSPORT were forced to take down the video to protect the Watford star?

Player-coach role with limited game time could be an important part of Luiz’s new deal
17 February 2021, 18:15 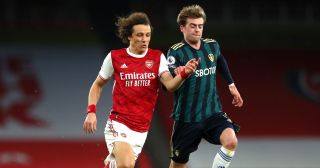