Is it too early for Arsenal to offer Walcott a new contract? 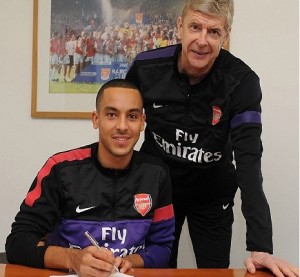 Walcott finally signed that contract on the 18th January 2013 nearly two full years ago, and the England international was reported to have won an increase to £90,000-per-week to persuade him to stay. Since that day Walcott has started 22 League games (and 10 as substitute) and has spent much more time on the treatment table than he has on the training pitch. And this is not just a recent phenomenom. If you ignore Walcott’s first breakthrough season when he started just 5 games, Theo has averaged only 15 League starts a year for the last 8 campaigns and this report shows that Walcott has had 14 separate injuries in the last five years

Now we all know that Walcott has always been an exciting player to watch and extremely fast when he is fit, but it would seem he is also very fragile, just like Robin Van Persie was for most of his Arsenal career. Walcott is definitely Arsenal through and through and we would all hope that he will stay fit and stay with the Gunners until the end of his career, but I am just a little bit wary about negotiating an improved contract with a player that has managed just ten League starts in the last 18 months.

Walcott looked sharp and scored a well-taken goal yesterday , but just remember that was his first goal in FOURTEEN MONTHS. Shouldn’t Wenger wait until Theo has proved his fitness over a period of time before offering him a contract?