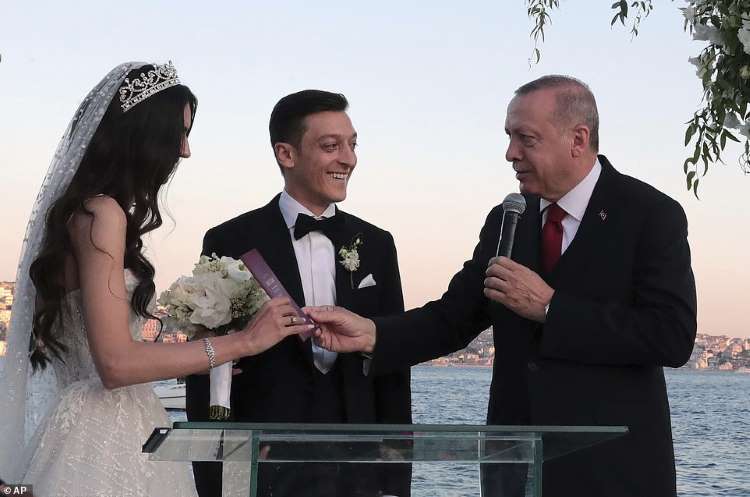 Is Ozil and Arsenal simply a marriage of convenience?

OZIL & ARSENAL – a marriage of convenience? by Funsho

It was towards the end of the 13/14 season’s Summer transfer window that news of Ozil’s likely signing by Arsenal started filtering through in the tabloids. As it occurred, the then 24-year-old world class pass master and king of the final pass (crowned by the special one himself-Jose Mourinho), chose to sign for Arsenal. I remember with nostalgia the scenes at the Emirates on SkySports Deadline Day Show, and the warm, fuzzy feeling this marquee signing brought. Gooners throughout the world spoke about the new signing with much gusto and pride.

He registered his first assist on his debut, scored his first vs Napoli in the champions league (when last did the competition’s theme tune play at the Emirates? Sighs!), and with that season culminating in the end of the club’s 512-game trophy drought, the new signing made a good impression in his debut season. He was a big part of the FA cup run and while he was arguably not the main spearhead (maybe Ramsey? maybe Santi?), buoyed by his signing with belief and a spring in their steps, the whole squad may have been covertly spurred to such trophy-winning heights.

Then came the 15/16 season in which he registered 19 assists in the EPL (a figure that would have been higher had the finishing been better), a couple of cup wins followed with Arsenal almost always flattering to deceive in the bigger competitions (EPL and CL), leading the club’s most prized assets (along with Alexis Sanchez) to doubt the feasibility of Arsenal competing with Europe’s elite and the ambition of the club’s powers that be. But, fast forward to Jan 2018 in a tale of two destinies (Sanchez left), the dilemma of keeping him at the club beyond that Summer was cleared when he signed a new deal until 2021. As you would have already decoded, this article is about the enigma-Mesut Ozil, but we have a long way to go in unpacking his relationship with Arsenal in this discussion; so, shall we?

First, a disclaimer that my motive here is neither to castigate Mesut nor is it to ramble on about his high take-home pay. Also, even though I may not be his biggest fan, I’m not a party to him being called names like “thief”, “fraud”, etc.; but I opine that Ozil and his agent – Dr. Erkut Sogut, are the “PR kings” of football, proficient at the “playing-the-victim//them-against-us” game. This agent speaks to the press every transfer window about Ozil’s desire to stay at Arsenal despite his many struggles. He may likely have a hand in some of his client’s most cryptic tweets, and while advising his client to hold off signing a new deal (and rightly so, who wouldn’t want a better pay cheque!) in the saga leading up to 2018, the unreal PR to the fans about his love for the club was steady. Okay, before you start criticising this writer, would you kindly read along and let’s think some things through. . .please?

To start with, think about the effect his meticulously-timed cryptic tweets had on Emery, was it too much of Unai to ask for more commitment and application from players to be in his team/matchday squad as the case may be? With the media questioning about Ozil after every bad result under Emery, I imagine how much pressure his “I AM READY” tweet the day before would have created for Arteta on July 15th had Liverpool won that league game. Well timed long ball, isn’t it? Thankfully, it was not to be, as Arsenal dispatched the champions 2-1 on the day.

Furthermore, while I’m against the witch-hunt by the club to freeze him out, how much glory does the German cover himself in whenever he plays? Granted he was decent recently when Arteta played him, but would you say he’s as indispensable as a De Bruyne at City, Henderson (err; Fabinho) at Liverpool or Bruno at United? Oh, I see you citing the club’s EPL chance creation stats (which Ozil led for 19/20 season by the way; kudos for that considering how little game time he had), but did they still not find a way to win a trophy in the face of such meagre goal-scoring opportunities after the team’s best creator was dropped?

Though it’s obvious there’s an undertone of hierarchical victimisation in the fate Ozil has suffered for a while now, isn’t it believable that he’s been dropped for “footballing reasons” like Mikel Arteta always says? We have to wait and see though, now that Raul Sanllehi (probably the greatest proponent of Ozil’s victimisation) has left the club, if his playing-time fortunes will improve or vapourize altogether.

Many thought-provoking questions already, eh? It should be noted that Ozil is at a loss with most Gooners because of his easy-going style, but that’s not to say he doesn’t try. Ever since criticism of his “lacklustre” demeanour began, he’s posted good returns for distance covered, sprints in a game, pass completion, accurate long balls, chance creation, among others. Being a very intelligent player, he’s good in tight spaces, in switching play, in dead ball situations and in the well-documented final balls for chance creation; but are these returns commensurate with expectations? I mean, does his actual output match up with the expected output based on his talents? Notice I didn’t say “based on his income”? That’s because I am of the opinion that the figure on his cheque when payday comes should not be the yardstick by which he’s judged, but by what he’s capable of doing on the pitch in relation to his innate ability; and most will probably agree he’s immensely blessed with talent for the beautiful game.

In the final analysis, there are several things we are not privy to, like the details of his lack of mins post lockdown, his motive for doing the recent David Ornstein interview, his actual rationale for joining Arsenal, whether he really loves this club or not, and his declared goal of either fighting for his place in Arteta’s team and actually playing football – or if there’s an undertone of just engaging in a power tussle with the Arsenal board for the remainder of his contract while he keeps getting paid by virtue of being legally contracted to the club.

However, some things are there for all to see: expectations at Arsenal are arguably not as high as they are at Real Madrid; fans at the Santiago Bernabeu are arguably more demanding than those at the Emirates; Ozil was in a more competitive team in Spain before he elected to move to England; and the mental strength to keep going at such a high level would not have been so easy to consistently muster.

So, was choosing Arsenal an easier option at the time? PERHAPS SO. Did Mesut genuinely believe this club offered a better opportunity to win the biggest titles, make history and achieve his career objectives? MAYBE NOT. Is it then safe to say #YaGunnersYa and other social media show of love between Mesut and his “bride” (the Arsenal) is just a marriage of convenience for the player? I’LL LEAVE THAT UP TO YOU TO DECIDE. But hopefully, an agreement that will BENEFIT both club and player can be reached this Summer.

Really appreciate you taking the time to read!