Is this the Arsenal XI set to start against Leciester?

After losing the opening game of the Premier league season at home, Arsenal fans can expect Arsene Wenger to make some changes to the starting line-up and probably not just to fill the gaps left by Aaron Ramsey and Alex Iwobi picking up injury problems in the loss to Liverpool.

Our manager has been a bit coy over the match fitness of Laurent Koscielny, Olivier Giroud and Mesut Ozil with their late returns after the Euro 2016 tournament, but I think he will be able to call on all three if he wants to, especially the German who did not go quite as far in the summer competition as his French colleagues.

Metro have employed their own experts and the stats on Wenger’s options to put forward what they think will be our starting XI against Leicester City today and they have given Chambers the nod over Holding to partner Ko0scielny in defence, with new signing Granit Xhaka replacing Coquelin in front of the back line.

They also prefer Cazorla to Elneny alongside Xhaka, with Ozil restored to the number 10 role. Finally they have Theo Walcott missing out, with Giroud playing through the middle and Oxlade-Chamberlain starting on the right. Is this how you think Arsenal will line up for the Foxes? 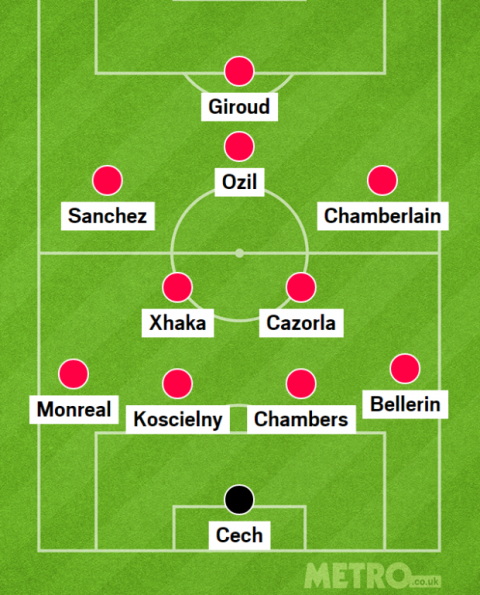