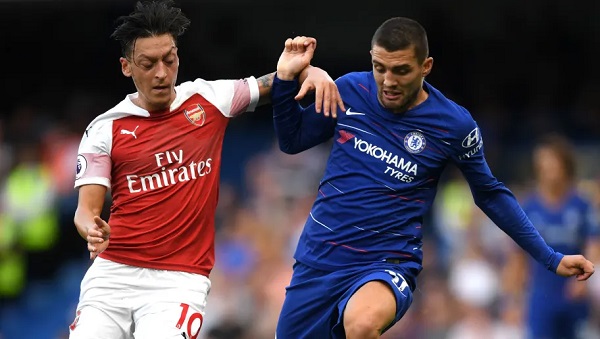 Is this the midfield/forward line up Arteta will send out against Chelsea?

Control of the midfield and clinical finishing will be the difference between Arsenal and Chelsea today.

Chelsea have the players to dominate the midfield and they have clinical forwards but so do Arsenal if Mikel Arteta deploys the right players and gets the tactics right. I believe he will do exactly that today.

Chelsea are not Liverpool or Man City, they are definitely beatable, yes they beat Spurs but they also lost to Southampton, Everton and Bournemouth in three of their last four Premier League games.

The Lucas Torreira and Granit Xhaka combo worked against Bournemouth and I feel it is an almost certainty that Arteta will select those two again.

The same applies to Mesut Ozil, I find it very unlikely that the German will be dropped and he will retain his starting spot.

The one player I think that will miss out is Reiss Nelson, I suspect that Nicolas Pepe will be brought in as his replacement.

Pierre-Emerick Aubameyang is most probably going to be shifted out to the left once again with Alexandre Lacazette down the middle.

So, this is the midfield/attacking lineup I expect Arteta to send out to take on Chelsea this afternoon.

I analysed the defence here and including them this is what the full eleven looks like.

Let me know in the comments what team you think Arteta will go with against the Blues.