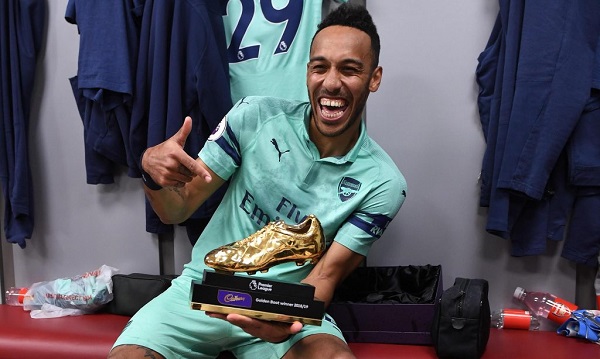 It doesn’t really matter if Arsenal sell Aubameyang or not

Why It Doesn’t Matter If Aubameyang Signs a New Deal

It’s that dreaded time for any Arsenal fan again. One of the team’s best performing players has a contract that is running out and we do not know what his decision will be.

Aubameyang has scored 65 goals in 90 appearances for Arsenal. That’s an amazing contribution — scratch that, a world class contribution ratio. He’s already competing for his second golden boot in his second year. Since he joined us, nobody has outscored him in the league. All of it while playing out of his favourite position. He’s simply an incredible goalscoring machine in a mostly dysfunctional team.

We have been here before. Alexis Sanchez and Mesut Ozil have been near or at this level for us in previous years. Then their contracts were almost up and things went spiralling downwards after. Alexis Sanchez, in the last 6 months of his contract, was swapped out for Henrik Mkhitaryan who has since been shipped off on loan to Roma. Somehow we got the better end of the deal. Mesut Ozil on the other hand signed a new huge contract and subsequently lost his mojo. Arsenal got shorted out on both ends and that fear persists with us till today.

Aubameyang is going to be 31 by the time the next season swings by. Although there is no evidence he’d suddenly lose his touch and goalscoring nous, that sense of deja vu is gathering. Should we sell him or not? That’s the question of the summer. Would he sign on a new contract without Champions League football? Even if he does — what kind of contract would that be and would it be worth it?

There’s no definite answer to any of this yet. But one answer exists that we haven’t considered: none of this matters.

If he signs on a new contract: he won’t suddenly decline. Benzema, Aguero, Cavani, Lewandowski, Vardy — Aubameyang is in this same exclusive class of strikers at their peak. That can only be good news for us because if we don’t qualify for the Champions League, we can make a proper push for it next season with a squad built around him. If we can then get Champions League football, a new contract for Aubameyang would have been worth it no matter what happens next. He’s just going to remain a regular source of goals for us and a world-class mentor for the likes of Eddie Nketiah, Gabriel Martinelli, Tyreece John-Jules and Folarin Balogun. I am pretty sure one of them will turn out capable of leading the line eventually.

If the worst happens: Aubameyang doesn’t want a new contract and therefore we have to sell, it’s not all gloom as well. Aubameyang is well on track for 25-30 goals this season. An absolute golden return. His value on the transfer market is still going to be extremely high. We will definitely get more than we bought him for and that is a significant sum of money. Enough to buy a class replacement. There are quite a few great strikers on the market within Aubameyang’s transfer price range. The market is a fluid thing and who knows? Perhaps we might just get a Luka Jovic or a Timo Werner. Or someone else who will be attracted by the lure of living in London, great wages, the face of Arsenal’s attack, regular playing time at a top team and all the razz and snaffle of playing in England. There’s always someone who will join: remember that we got both Alexandre Lacazette and Aubameyang within six months of one another. If that is not evidence enough that we are still one of the most attractive teams to play for, remember we only got Nicolas Pepe who’s on track for 10 goals and 10 assists in his first season only last summer. The point is that there is always someone very good out there we can get. Edinson Cavani on a free is not very impossible, even without Champions League football.

Another option is to reinvest the funds in other areas of the pitch and trust Lacazette to lead the line for one more season. Imagine what wonders a midfielder worth over 55 million euros would do to us. If we concentrate solely on improving the middle with the likes of Mustafi (20 million), Ozil (15 million) and Sokratis (7-10 million) being sold off, we might be looking at an elite midfield.

Quick mind exercise: Xhaka is sold, too (30-35 million). The sales would probably come around 75 million euros as a very conservative estimate (I figure we could sell Mustafi and Ozil for more than that if the window is a good one).

Let’s say the initial budget is 35 million euros (Another conservative estimate, considering that we are not factoring in the possibility of the Europa League trophy, a Champions League spot, owner’s plausible investment, or that new lucrative shirt sponsorship due after this season). That’s a modest 110 million euros generated. Add in Aubameyang’s fee (let’s use a ridiculously low 50 million euros figure) and we are around 160 million euros. Thomas Partey’s release clause stands at 50 million euros. If we get him or someone else who’s an improvement over Xhaka, we’d still have enough left to get a pair of top-tier midfielders.

That’s a team I can get behind. Please note that I’m using conservative estimates of what the sales of players, the basic transfer budget (last season’s was 40 million euros) and the money from Aubameyang’s sale might look like. In fact, I think there’d be more than enough left to get a high-profile addition to the team, a young premium talent like William Saliba or two lesser known ones like Guendouzi or Martinelli.

This is all conjecture. We may get conned into overpaying for the new players. Someone might get an injury. Ozil might stay. But what is instantly sure is that if we sell Aubameyang and choose to reinvest that in other areas of the pitch with the money, we are going to be much more stronger on paper than what is currently obtainable. The Kroenkes will hopefully not become like the Glazers and suddenly start to withdraw significant sums for themselves.

Agboola
Whether Aubameyang decides to leave or not, we are going to enjoy next season better than this one. We are getting the best end of the stick this time around. Our coach has not done his best yet. Our squad is not going to get worse. Strap yourself in. Good times are ahead, Gunners!